A trial looking at nivolumab for head and neck cancer (CA209141)

Radiotherapy is a common treatment for head and neck cancer that has come back or spread to another part of the body. You can have it on its own, or in combination with chemotherapy (chemoradiotherapy).
Sometimes, head and neck cancer comes back or spreads to another part of the body. When this happens, you might have treatment with 1 of the following chemotherapy drugs:
This was the treatment that most people had at the time this trial was done (

).
Nivolumab (also known as Opdivo) is a type of immunotherapy called a monoclonal antibody. It works by helping the

to fight cancer cells.
The main aim of this trial was to find out whether nivolumab works better than the standard treatment for people with advanced recurrent or metastatic head and neck cancer.

The trial team concluded that nivolumab helps some people with head and neck cancer that has spread or come back.
This was an international phase 3 trial. 361 people took part. Everyone was having treatment for the 1st time after their cancer came back or spread to another part of the body.
This was a randomised trial. This means that the people taking part were put into 1 of 2 treatment groups at random by a computer.
Neither they nor their doctor could choose which group they were in. And people were 2 times more likely to have nivolumab than the standard treatment. 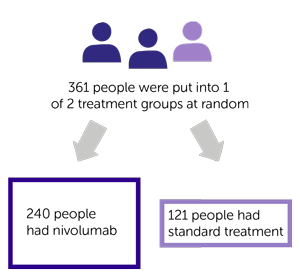 The trial team looked at how well nivolumab worked. To do this, they looked at many factors including the average length of time people lived. This is called overall survival. They found that on average:
The team also looked at the average length of time people lived without any signs of their cancer getting worse. Doctors call this progression free survival. They found that, on average, people in both groups lived around 2 months without signs of their cancer getting worse.
Doctors looked at the most common side effects people had in the nivolumab group. They were:
The most common side effects in the standard treatment group were tiredness, sickness and a drop in the level of red blood cells (anaemia). People in this group had worse side effects than people in the nivolumab group.
People were asked to complete questionnaires before the start of treatment, and at set times during the trial. The questionnaires asked about how cancer and treatment affected their quality of life.
The trial team found that the people’s quality of life decreased during treatment, in both groups. But people in the nivolumab group maintained a better quality of life for longer, than the people in the standard treatment group.
The team concluded that nivolumab helps people with advanced recurrent or metastatic head and neck cancer. They think this treatment is tolerated well and helps people maintain their quality of life for longer.
We have based this summary on information from the research team. The information they sent us has been reviewed by independent specialists (