What are randomised trials?

The video below shows how a randomised trial works. It is about 2 minutes long.

What is a randomised trial?

Randomised trials have at least 2 different treatment groups. The people taking part are put into one of the groups at random. This process is called 'randomisation' and is usually done by a computer. Most phase 3 trials and some phase 2 trials are randomised.

Often there is one group who have the standard treatment they would have if they weren’t in the trial. They are the control group.  People in the other group (or groups) have a new treatment or procedure that is being tested. A randomised trial that has a control group is called a randomised controlled trial (RCT).

Sometimes there is no standard treatment available for the control group. This could be because people have already had all the treatments currently available. In this situation, the people in the control group would have a dummy treatment. This is called a

Researchers run randomised trials because they need to be sure that the results are correct. And that there is no

that could distort the results. Of course, researchers are unlikely to be deliberately biased. But it is possible to be biased without realising it.

For example, doctors may avoid putting patients who are more unwell into a particular trial group without really meaning to. The people in this group then may not do as well as people in another group. This is because they were more unwell to begin with. The results would look as if the one treatment works better than the other, but really it doesn't.

The research team put information about the people taking part into the computer program. This might include the following:

This makes sure that the groups are as similar as possible. Then the researchers know that if one group does better than the other, it’s because of the different treatment. And not because of general differences in the people taking part. 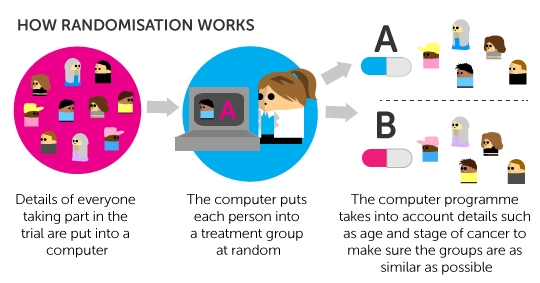 What is a placebo?

A placebo is a dummy treatment.

Some trials compare a new treatment with a placebo. It looks exactly like the actual treatment. It's the same shape or colour of pill, or size of injection.

Comparing a group of people taking a new treatment with a group taking a placebo can show if the new treatment is really working. A drug that actually works will work better than a dummy drug.

Researchers only use a placebo if there is no standard treatment available. The patients in the control group wouldn't have any treatment if they weren't in the trial. So they are not missing out on treatment they would otherwise have had.

It isn't ethical to give a placebo to a group of people who really need treatment for cancer. The research ethics committee would not give permission for a trial designed in that way. We have information about how trials are approved.

A blind trial is a trial where the people taking part don't know which treatment they are getting. They could be one of the following:

This depends on the design of the trial. All patients have identical injections or tablets, so they can't tell which treatment they are having.

The list of patients and their code numbers are kept secret until the end of the trial. In an emergency, the researchers could find out which trial group a patient was in. This is to check that the emergency wasn’t caused by the trial drug. But generally no one knows which treatment you had until the trial has finished.

We have information about

How to find a trial