This trial was for people with diffuse large B cell lymphoma who had a high risk of their cancer coming back after treatment.

Diffuse large B cell lymphoma (DLBCL) is a type of high grade non Hodgkin lymphoma. The standard treatment for DLBCL is R-CHOP chemotherapy.

This is a successful treatment for many people. But people with high risk lymphoma have an increased chance of it coming back or continuing to grow despite treatment.

Enzastaurin is a type of biological therapy. It blocks the signals that tell lymphoma cells to grow. Earlier research had shown that enzastaurin may help to slow or stop cancer growth.

Doctors thought that enzastaurin might help to keep lymphoma in

for longer. This is called maintenance treatment.

The researchers found that enzastaurin did not benefit people with diffuse large B cell lymphoma who had a high risk of their cancer coming back. It did not work as a maintenance treatment.

This was an international randomised trial. The people taking part were put into 2 groups by computer. 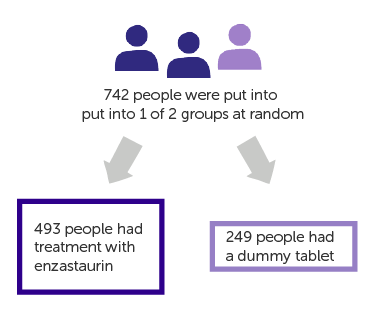 Everyone had enzastaurin or placebo tablets every day for up to 3 years. Or until their disease started to grow again, or they had to stop treatment because of severe side effects.

After 4 years, the trial team looked at how many people had no signs of their lymphoma (were in remission):

The researchers concluded that there was no significant difference between the 2 groups. Those who had enzastaurin were not in remission for any longer compared to those people who had the placebo.

The researchers found that people in both groups had mainly mild side effects.  Those people who had enzastaurin had more:

The ECG changes in people did not generally cause symptoms and were harmless. People did not have to stop treatment as a result.

Most people taking part (in both groups) had just under 3 years of treatment. The main reason why people stopped treatment early was that their lymphoma had come back (relapsed).