Pleurodesis means sealing the space between the 2 outer linings of the lungs (the pleura) so that fluid can’t collect there. This fluid build up is called a pleural effusion and it can cause shortness of breath.

Doctors can treat pleural effusions by draining off the fluid through a tube, called a chest tube. They may also put talc through the chest tube to seal up the space around the lung and stop the fluid coming back again.  But this can cause pain and discomfort. The researchers in this trial wanted to find the best way of controlling this pain. 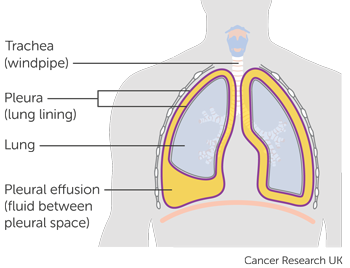 Doctors can use a large or small size chest tube for the pleurodesis. And they usually give people painkillers when they have this procedure. They sometimes use an opioid painkiller called Oramorph (morphine), or a non steroid anti inflammatory drug (NSAID) called ibuprofen. In this trial, some people had morphine and some people had ibuprofen for pain.

The aims of this trial were to find out

The trial team found that there was no difference in pain scores between the 2 different types of painkillers. Having a small chest tube resulted in less pain and discomfort but the fluid build up was more likely to come back in this group.

320 people took part in this trial.

206 people had a large chest tube put in. This is because their doctor needed to have a look at the lining of their lung with a small camera. This is called a

Everyone completed a pain questionnaire after the pleurodesis at

People also had a chest x-ray or ultrasound scan 1 month and 3 months after the pleurodesis.

When the trial team looked at the results, they found

The trial team concluded that there was no difference in pain scores. Having a smaller chest tube was a bit less painful but wasn’t as successful as the larger tube to stop the fluid building up again.