This trial looked at Lucanix for people who had recently had chemotherapy for non small cell lung cancer that was stage 3 or 4 (advanced cancer).

Advanced non small cell lung cancer (NSCLC) are cancers that might have spread to:

Advanced NSCLC is usually treated with:

Researchers are looking at ways to improve treatment and stop the cancer from starting to grow again. In this trial they looked at a cancer vaccine called Lucanix (belagenpumatucel-L). They thought it might help the immune system to recognise and flight lung cancer cells.

The main aims of the trial were to:

532 people with NSCLC took part in this international phase 3 trial. Everyone had chemotherapy with a

before joining the trial. 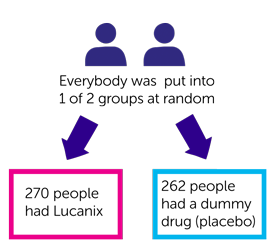 The trial team looked at how well Lucanix worked. To do this they looked at the amount of time people lived (overall survival). They found that people who had:

The team also looked at the average length of time it took before people’s cancer got worse (progression free survival). They found that this was about 4 months for both groups.

Doctors also looked at the possible side effects of treatment. These were:

The trial team concluded that Lucanix does not help people with advanced NSCLC to live longer. But there might be a benefit for people who start Lucanix within 3 months of finishing chemotherapy, and for people who have radiotherapy before Lucanix.

The team also concluded that there weren’t many side effects, so they think this is a safe treatment. They suggest that more clinical trials should be done using Lucanix for people who have finished chemotherapy less than 3 months ago. They also suggest that more studies should be done to look at radiotherapy before treatment with drugs that stimulate the body’s immune system to fight cancer (immunotherapy).