A trial of MK-1775 with chemotherapy for ovarian cancer

This trial is looking at a new drug called MK-1775 alongside paclitaxel and carboplatin for ovarian cancer that has come back.

MK-1775 is a type of biological therapy.  It is a cancer growth blocker. It stops signals that cancer cells use to divide and grow.

Some cancer cells have a particular change (a

called p53. The p53 gene is involved in controlling how cells divide and grow. If the gene is changed, it doesn’t control cell growth in the same way and allows certain cancers to grow.

The women taking part in this trial have tumours that have a particular mutation to the p53 gene. They also have cancer that responded to treatment with

To be able to take part in this trial, the researchers must be able to test a sample of your cancer to see if it has a particular change to the p53 gene. 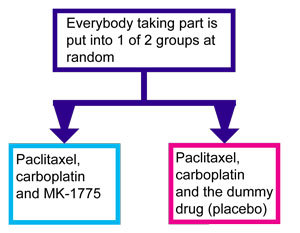 You have paclitaxel and carboplatin through a drip into a vein once every 3 weeks. Each 3 week period is called a cycle of treatment. MK-1775 (and the dummy drug) is a capsule that you swallow. You take them 5 times in each cycle of treatment. You keep a diary at home to note down exactly when you take the capsules.

As long as you don’t have bad side effects, you can have up to 6 cycles of treatment.

. If there isn’t a sample available, you will need to have a new biopsy. This is to see if the cancer cells have a changed P53 gene.

During treatment, you go to hospital once a week. You have regular blood tests. You have a CT or MRI scan every 6 weeks.

When you finish treatment, you see the trial team a month later and have a physical examination and blood tests. You then see them and have a CT or MRI scan every 6 weeks or every 3 months, depending on how your cancer responded to treatment. Your doctor will explain this to you.

As MK-1775 is a new drug, there may be side effects we don’t know about yet. In other trials, the most common side effects have been

We have more information about the side effects of paclitaxel and carboplatin in our cancer drugs section.