This trial is looking at 2 new drugs called dabrafenib and trametinib. It is for people who have had a melanoma removed and whose melanoma cells have a change in a gene called BRAF.

The BRAF gene affects how cells divide and grow. Sometimes the gene is changed or damaged. This is called a gene

. About half of all people with melanoma have a BRAF gene mutation in their cancer cells.

The first treatment for melanoma is usually surgery. This often cures early stage melanoma. But if melanoma has spread into

, there is a high risk that it may come back in the future. You can have treatment after surgery to try to prevent this (

). But at the moment doctors don’t know what the best adjuvant treatment for melanoma is and people should only have this type of treatment as part of a clinical trial.

In this trial, they are looking at 2 drugs called dabrafenib and trametinib. These are both types of biological therapy called cancer growth blockers. They work by stopping signals that cancer cells use to divide and grow.

Half the people take dabrafenib and trametinib together. The other half take dummy drugs ( 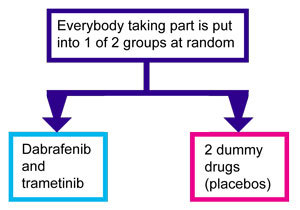 The 2 dummy drugs will look exactly the same as the dabrafenib capsules and the trametinib tablets, and you take them in the same way.

As long as you don’t have bad side effects and your melanoma doesn’t come back, you can carry on having the trial drugs (or dummy drugs) for a year.

The trial team will ask you to fill out a questionnaire before you start treatment, every 3 months for 2 years and then every 6 months after that. The questionnaire will ask about side effects and how you’ve been feeling. This is called a quality of life study.

During the trial, the researchers will take a number of extra blood samples to look for substances called

that can help them to see how well the treatment is working. They will also study the blood samples to learn more about what happens to the drugs in your body (

The trial team will ask to take an extra blood sample to look at how genes affect the way people respond to a drug and the side effects they have. This is called

. You don’t have to give this sample if you don’t want to. You can still take part in the trial.

If you develop a non melanoma skin cancer during the trial, your doctor may ask to take a biopsy of it. Having this biopsy is also optional.

You then go to hospital

At each visit you have blood tests and a physical examination. At some visits you also have an eye test, a heart trace, a heart scan and a CT scan.

If your melanoma comes back, you will need to have a CT or MRI scan and blood tests. The trial team may ask you to have another

. They will then contact you every few months to see how you are and find out if you are having any other melanoma treatment.

As dabrafenib and trametinib are new drugs, there may be some side effects we don’t know about yet. In an earlier trial, the most common side effects of having both drugs together were

Your doctor will talk to you about all the possible side effects before you agree to join the trial.