This trial looked at the amount of tissue surgeons removed around the melanoma during surgery for melanoma skin cancer.

Surgery is the usual treatment for melanoma skin cancer. The doctor removes the mole or area of skin. An expert (

) looks at this under a microscope if the doctors suspects it’s melanoma.

You have a further operation called a wide local excision if it is a melanoma. The surgeon removes more of the tissue in the area where the melanoma was. The aim is to remove any abnormal cells that may have been close to the melanoma. It reduces the chance of the melanoma coming back in the future.

Guidelines recommend that the surgeon removes a margin of between 1 cm and 3 cm if someone has a melanoma thicker than 1 mm. Researchers from around the world think that removing a 1 cm margin could be enough to reduce the risk of the melanoma coming back. But this needs to be tested in a trial before it becomes standard practice.

The advantages of a smaller margin could be that it leaves a smaller scar, people recover more quickly and it may be less painful.  It also might mean that more extensive reconstructive surgery, for example a skin graft may not be necessary.

The researchers found that people in the 2 cm margin group were about three times more likely to need a reconstruction after the wider excision of their melanoma, such as a skin graft than the those in the 1 cm group. They also found that at 12 months after surgery, there were no differences in quality of life or complications between the two groups.

400 people from around the world took part in this trial. They were put into 2 different groups at random. Of those: 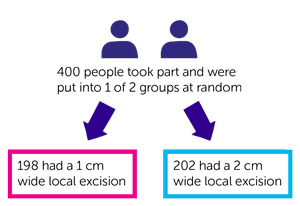 At the same time as the wide local excision, everyone had an operation to remove the lymph glands closest to the melanoma (a

biopsy). This was part standard treatment.

The doctors looked where the melanomas were on the body.

The researchers had the results for 377 people. They looked at who needed a complex reconstruction such as a skin graft. This was in:

Everyone who took part completed

The researchers say this pilot study shows it is possible to do a larger trial with more people. This future trial should be able to answer for sure the best excision margin for people with a melanoma skin cancer more than 1 mm thick.