A trial looking at LY2940680 for small cell lung cancer

This trial is looking at a new drug called LY2940680 with carboplatin and etoposide chemotherapy for small cell lung cancer that has spread beyond the lungs.

Doctors usually use chemotherapy to treat small cell lung cancer that has spread beyond the lungs (extensive disease). One combination of drugs they use is carboplatin and etoposide. This combination works but researchers are always looking for ways to improve treatment.

LY2940680 is a type of biological therapy called a cancer growth blocker. It stops signals that cancer cells use to divide and grow.

In this trial some people will have LY2940680 with carboplatin and etoposide. And some will have a dummy drug (

) with carboplatin and etoposide.

The treatment groups are 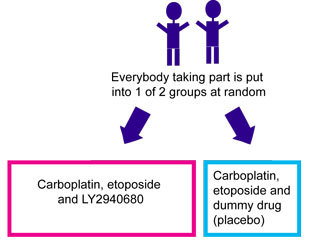 LY2940680 and the dummy drug are capsules. You take them 4 times every day for 3 weeks and then have a week of not taking them. Each 4 week period is called a cycle of treatment.

After 6 cycles your doctor may talk to you about having radiotherapy to your head to kill off any cancer cells that may have spread to your brain. This is called prophylactic cranial irradiation (PCI). And then they may talk to you about continuing with LY2940680 or the dummy drug. You continue having treatment as long as it is helping you and the side effects aren’t too bad.

. They will also ask for blood samples and some tiny samples of your skin. They will use these to find out how well the treatment works. You must agree to give these samples if you take part in the trial.

If you take part in the 2nd part of the trial, the trial team will ask you to fill out a questionnaire before you start treatment, every 4 weeks during treatment and after you finish treatment. The questionnaire will ask about side effects and how you’ve been feeling. This is called a quality of life study.

You see the doctor to have some tests before taking part in this trial. These tests include

During treatment you see the doctor every 4 weeks for the same tests, apart from the heart trace. You have a CT scan or MRI scan every 6 to 8 weeks.

You see the doctor for the same tests (apart from the heart trace) a month after finishing treatment and then every 3 months.

LY2940680 is a new drug and there may be side effects we don’t know about yet. The most common side effects reported include

We have information on the side effects of carboplatin and etoposide.