A trial looking at ibrutinib for chronic lymphocytic leukaemia (HELIOS)

This trial was for people whose chronic lymphocytic leukaemia or small lymphocytic lymphoma had come back or whose treatment had stopped working.

are cancerous and accumulate in the blood. Having small lymphocytic lymphoma (SLL) means the cancerous lymphocytes are in the

rather than in the blood. The treatments for CLL and SLL are the same.

The usual treatment for CLL or SLL that has come back or when treatment has stopped working is to use chemotherapy drugs. This might include an antibody drug called rituximab and the chemotherapy drug bendamustine. These can help but doctors are always looking for ways to improve treatment.

In this trial, they looked at a targeted cancer drug called ibrutinib. It is a cancer growth blocker. It stops signals that cancer cells use to divide and grow.

We know from research that ibrutinib can help people with CLL or SLL. The researchers in this trial thought that adding ibrutinib to rituximab and bendamustine might work better. But they weren’t sure, so they wanted to find out more.

In this trial, some people had ibrutinib, rituximab and bendamustine. And some had rituximab, bendamustine and a dummy drug (

This phase 3 trial took place worldwide. 578 people took part. Everyone had already had 2 or more treatments for their CLL or SLL that had come back or stopped responding to treatment. They were put into 1 of 2 groups at random. 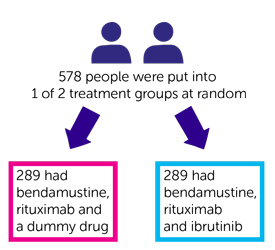 The number of people with CLL or SLL was the same in both treatment groups. Neither the people taking part nor their doctors knew which treatment group they were in. This is called a double blind trial.

People having the dummy drug could start having ibrutinib if their lymphoma got worse.

The committee that monitors the safety and design of the trial (the data monitoring committee) did an early analysis of the results in March 2015. They recommended that the trial was unblinded so the doctors and everyone taking part knew which treatment they were having.

The committee looked at the average length of time people lived without signs of their lymphoma getting worse. This is called progression free survival. They found this period of time was much longer in in the ibrutinib group than in those who had the dummy drug.

It was on average 13.3 months in people who had the dummy drug. When this analysis was done it wasn’t possible to find the average progression free survival in the ibrutinib group because more than half of these people still had their disease under control.

The trial team didn’t find a statistical difference in how long people lived (overall survival). But at the time of analysis, 90 people had stopped the dummy drug because their lymphoma got worse and started having ibrutinib. So, the researchers say this made it difficult to interpret the results. The trial team hope a longer follow up period will give them more information about overall survival.

The main reason people stopped treatment in the ibrutinib group was because of the side effects. The most common side effects in both groups were:

. This caused bleeding in a small number of people.

People who had ibrutinib had more problems with diarrhoea but this was usually mild.

The trial team concluded that ibrutinib worked well for people with CLL or SLL alongside bendamustine and rituximab and the side effects were manageable.

) and published in a medical journal. The figures we quote above were provided by the trial team who did the research. We have not analysed the data ourselves