Studies have shown that exercise after bowel cancer surgery might reduce the risk of the cancer coming back. It can also reduce the tiredness (fatigue) and depression that might happen after surgery. But often people in this situation don’t know if it is safe to exercise.

Cardiac rehabilitation is a programme of exercise and health advice for people recovering from a heart attack. This gives them the confidence to exercise and improve their wellbeing.

The researchers thought that this programme might help people who were recovering from bowel cancer surgery.

In this pilot trial the researchers asked people who were recovering from bowel cancer surgery to take part in a cardiac rehabilitation programme. This was alongside people who have had a heart attack.

The aims of this pilot trial were to find:

The trial team found that it was possible and acceptable for bowel cancer patients and heart attack patients to do the cardiac rehabilitation programme together.

Everyone who took part had surgery to remove their cancer.

Everyone who went to the rehabilitation programme was expected to go to 10 exercise sessions.

There were 2 parts to this trial. On 3 separate occasions everyone in part 1 wore a small device on their wrist. This monitored and recorded their physical activity. In part 2 only people who took part in the rehabilitation programme did this.

Everyone was asked to fill in 3 short questionnaires:

In both parts the team also interviewed people who took part about the trial and how it was run.

Part 1 results
This part was a feasibility study. This part took place in a single hospital.

24 people with bowel cancer were given information about the study.

Of the 10 people willing to take part 4 agreed to.

Going to the rehabilitation programme
Of these 4 people:

Interviews
People interviewed said that the barriers to take part in the trial included:

Part 2 results
This part was a randomised trial. 41 people agreed to take part.

Everyone who took part was put into 1 of 2 groups by a computer. Neither they or their doctor choose which group they were in. 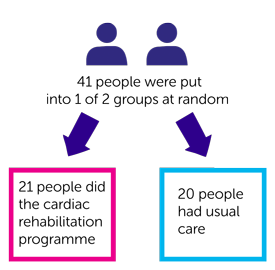 Wearing the device
The researchers had 65 separate sets of information (that is 3 sets for each of the 41 people) from the device to look at. They could use 45 sets.

The main reason for not being able to use the other 20 sets was that on these occasions people didn’t wear the device.

Questionnaires
The majority of people in both groups completed the questionnaires on each occasion.

They asked them what they thought about the rehabilitation programme.  Their answers came under 7 main themes.

Confidence and motivation
The cardiac rehabilitation programme seemed to give the bowel cancer patients the motivation and confidence to start to become more physically active.

Peer support
The programme gave people the social opportunity to tap into support from others who were recovering from the same illness.

Mixed patient rehabilitation
No one had any problem with bowel cancer patients taking part in the cardiac rehabilitation programme with cardiac patients.

Barriers to taking part in the rehabilitation
These included:

Capability
The cardiac rehabilitation professionals felt they wouldn’t have the relevant knowledge and skills to provide the necessary support for people with cancer as this wasn’t their speciality.

Capacity
The cardiac rehabilitation team were concerned about not been able to deal with an increase in the number of people taking part in the programme.

The trial team concluded that using the cardiac rehabilitation programme for bowel cancer patients after surgery was acceptable and possible to do. To find out how well this programme would work, a large clinical needs to be done. And a few changes need to be made to deal with the barriers that might stop people taking part.