A trial looking at AZD2014 for advanced kidney cancer (ZEBRA)

This trial compared AZD2014 with everolimus (Afinitor) as a treatment for kidney cancer. It was for people with a type of kidney cancer called clear cell that had spread to another part of the body.

All of these drugs are biological therapies. This treatment can help, but the cancer may come back. Doctors may then use another type of biological therapy called everolimus. Everolimus is a cancer growth blocker. It works by stopping signals that cancer cells use to divide and grow.

AZD2014 is also a cancer growth blocker. It blocks more signals than everolimus does and researchers thought that it may work better for advanced kidney cancer.

The aims of this trial were to

The trial team found that AZD2014 did not work as well as everolimus and so recruitment into the trial was stopped early.

The trial was randomised. This means the people taking part were put into 1 of 2 treatment groups by a computer. Neither they nor their doctor chose which group they were in. 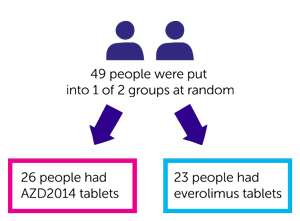 The researchers looked at the time it took for the cancer to start growing again. On average it was

The researchers also looked at how long people lived for. They found that on average

The most common side effects reported in both groups were

There were no significant differences between the groups in the type of side effects people had. But more people having everolimus rated their side effects as severe, compared to those having AZD2014.

The researchers concluded that people coped well with the side effects of either drug.

The researchers planned to recruit 120 patients. But the trial was stopped after 16 months. This was because the researchers found that AZD2014 was not as good a treatment as everolimus.

All patients stopped treatment as part of the trial. Future treatment was then discussed with people on an individual basis.

These findings support earlier trials that show everolimus is a useful drug for people with advanced clear cell kidney cancer.