This trial was to see if PET scans could be used to make decisions about treatment for Hodgkin lymphoma.

This cures many people. But some people need stronger treatment. And others might be cured with less treatment.

Researchers thought a PET scan could show doctors how well ABVD had worked. In this trial everyone had a scan after 2 months of treatment with ABVD. Depending on the results of the scan doctors changed the treatment.

Bleomycin can cause lung damage. Doctors wanted to see if it was safe for some people to have less bleomycin. So half of the people who had a negative scan continued their treatment without bleomycin (AVD). And the others continued to have all of the drugs.

People who had a positive scan had a more intensive chemotherapy combination called BEACOPP.

The aims of the trial were to find if:

This was a phase 3 trial. 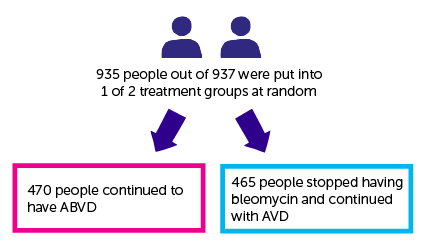 The team looked at the number of people who were alive after 3 or more years of follow up. This is called overall survival. They found that:

They also looked at the number of people who were alive and their lymphoma had not come back. This is called progression free survival. They found that it was:

Because bleomycin causes lung damage the researchers particularly looked at this side effect. They found that the number of people who had lung problems such as shortness of breath was lower in the AVD group than those in the ABVD group.

People with a positive scan
Everyone who had a positive scan had intensive chemotherapy called BEACOPP. This was to see if the response of their lymphoma could be improved.

Previously only about 15 out of every 100 people (15%) with a positive PET scan who continued treatment with ABVD remained free from lymphoma.

The worst side effects of BEACOPP were:

The trial team concluded that: