This trial compared nivolumab (BMS-936558) with everolimus to treat cancer that had grown outside the kidneys or had spread to another part of the body.  It was for people with the most common type of kidney cancer called renal cell cancer.

Doctors often treat advanced kidney cancer with biological therapies that block blood vessel growth to cancer cells. These are called anti angiogenic drugs. If your cancer had stopped responding to these drugs, you may have another drug called everolimus.

In this trial, researchers looked at a new drug called nivolumab. It is another type of biological therapy called a monoclonal antibody.

The aim of the trial was to see if nivolumab worked better than everolimus for advanced renal cell cancer in people who already had other anti angiogenic drugs.

The trial team found nivolumab was better than everolimus for people with advanced renal cell cancer.

This was an international phase 3 trial. It was a randomised trial. 821 people were put into 1 of 2 treatment groups 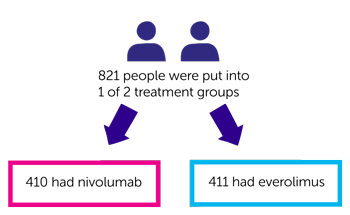 The team looked at how well the 2 treatments worked.

For those who had nivolumab

For those who had everolimus

The trial team looked at the number of people who had died. They found that

Overall the average length of time people lived was

The most common side effects of nivolumab were

The most common side effects of everolimus were

People were asked questions about how their cancer and any treatment affected their day to day life. This called

At the start of the trial the average score for quality of life was the same in each group.

During the trial the average score for those having nivolumab increased. This means that people rated their ability to manage day to day living as better than those having everolimuis. And they reported coping with their treatment more easily.

At the end of the trial there was a considerable difference in the quality of life score between the 2 groups.

The team concluded that for people with advanced renal cancer who have already had other anti angiogenic drugs there is benefit in having nivolumab.