This trial looked at ways of improving

This trial was supported by Cancer Research UK.

Surgery is usually the first treatment for breast cancer. Research has shown that having whole breast radiotherapy after breast conserving surgery lowers the risk of the cancer coming back (relapse). There are some possible long term side effects from having radiotherapy to your breast. For example, your breasts may become harder or smaller.

Doctors want to reduce the risk of these long term side effects. They hoped that they could do this by either:

The aims of this trial were to see if:

They also found that the long term side effects were the same, or less, with the partial breast or reduced dose radiotherapy compared with standard whole breast radiotherapy.

2,018 women took part in this phase 3 trial. Two women did not want to be included in the trial results. 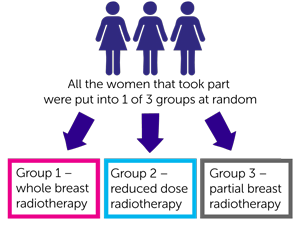 Group 1 – whole breast radiotherapy
674 women were put into this group. Of these, 666 women had standard radiotherapy to the whole breast. 8 women did not have the allocated radiotherapy. This was for a number of reasons, including the women choosing not to have this treatment. Or that the radiotherapy was no longer a suitable treatment for them.

Group 3 – partial breast radiotherapy
669 women were in this group. Of these, 641 had standard dose radiotherapy only to the area where the cancer had been, with no radiotherapy to the rest of the breast. 28 did not have the allocated radiotherapy.

The trial team looked at how often the cancer came back in the area where the cancer had been. This is called local relapse. After an average of around 72 months the number of women with local relapse was:

The trial team also looked at:

They concluded that these were similar in each of the 3 groups after 5 years.

Side effects
After 5 years, the trial team looked at the side effects of radiotherapy treatment on the breast. They looked at a combination of:

Longer term side effects were uncommon in all of the 3 groups. And severe long term effects of the treatment were very rare.

Women reported having fewer changes to their breast appearance in the partial breast radiotherapy than those having standard treatment.

Fewer women reported having breast hardness in the reduced and partial radiotherapy groups than those having standard treatment.

The trial team think that this way of giving partial breast radiotherapy is safe and effective for women with a low risk of their breast cancer coming back. They suggest that doctors could give this type of radiotherapy easily to women in most treatment centres worldwide.

The trial team are interested in comparing this study with other trials looking at partial breast radiotherapy. And they suggest more research looking at the possible effects of this treatment on developing a second cancer or heart problems a long time after treatment.

The trial team will continue to follow up as many women taking part in IMPORT LOW as possible. They will look at the results again after 10 years.