This trial looked at a drug called bevacizumab (also known as Avastin) and chemotherapy for soft tissue sarcoma. It was for children and young adults up to the age of 18 who:

We use the term ‘you’ in this summary, but if you are a parent, we are referring to your child.

Chemotherapy is a treatment for soft tissue sarcoma that has spread to other parts of the body. You usually have it with either (or both):

In this trial, researchers wanted to see if adding a drug called bevacizumab to chemotherapy, is better than chemotherapy alone.

The aim of this trial was to see if bevacizumab with chemotherapy is better than chemotherapy alone for children and young adults with metastatic soft tissue sarcoma.

The trial team concluded that adding bevacizumab to chemotherapy in children and young adults with soft tissue sarcoma that has spread didn’t work any better than chemotherapy alone.

This was a phase 2 trial. 154 children and young adults with metastatic soft tissue sarcoma took part. Everyone was having treatment for the first time, after their cancer spread to other parts of the body. 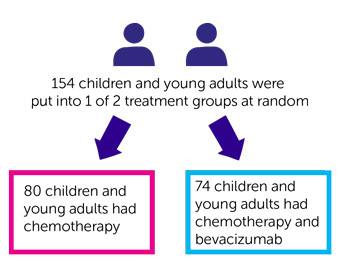 Everyone had chemotherapy in cycles of treatment. The number of treatments people had, depended on their needs and the side effects. On average, children and young adults had treatment for about 18 months.

The trial team looked at how well bevacizumab worked. To do this, they looked at the average amount of time people lived without any signs of their cancer getting worse. They found it was:

The team also looked at the most common side effects. They were:

The side effects were similar in both groups.

The team thinks that this trial did not show strong evidence that adding bevacizumab to chemotherapy improves the average amount of time people live without any signs of their cancer getting worse. In other words, it wasn’t

They also concluded that chemotherapy with bevacizumab is a safe treatment for children and young adults.