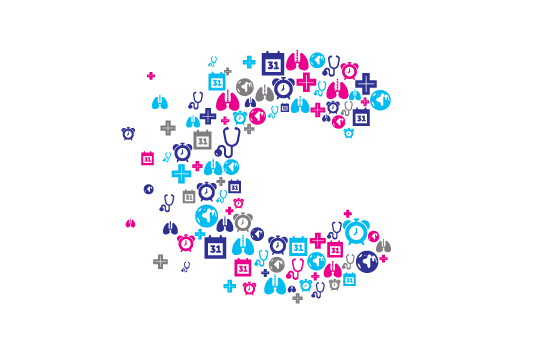 Early Diagnosis Initiative
How can we diagnose more cancers earlier?
Read our blog

The earlier the stage at which cancer is diagnosed, the better the chance of survival. And so, reducing late stage/advanced stage cancer is a key part of our strategy to improve outcomes for people affected by cancer.

Cancer Research UK has been working in the field of early diagnosis for more than a decade. This was initially as part of the National Awareness and Early Diagnosis Initiative (NAEDI) introduced following the Cancer Reform Strategy for England in 2007. Since 2014, we have also significantly invested in Early Detection research. We champion an evidence-based approach to identifying and embedding the developments that are needed to secure a meaningful reduction in the diagnosis of late stage disease through earlier disease detection.

We operate across the entire diagnostic pathway, and with researchers, the public, patients, health professionals and key opinion leaders to drive high-quality research and the implementation of evidence into policy and practice. We work in partnership with a wide range of organisations in delivering this work.

How do we achieve early diagnosis of cancer?

There is a lot of interest in improving cancer outcomes through moving patients from a late stage diagnosis to an earlier or early one. But the challenge is knowing what exactly is needed in order to achieve this.

What is clear is that there is no one thing – achieving early diagnosis is a complex problem that needs to be tackled on a range of fronts at all levels of the system. It’s also not something we can solve purely on the basis of what is known – we need action and research if we are to make a real, significant difference and achieve our ambitious ambitions. This is fundamental to CRUK’s approach to Early Detection and Diagnosis.

The UK Governments recognise the importance of diagnosing cancer at an early stage and there are various targets, plans and initiatives in place to work towards it. In England, the NHS have set bold ambitions for cancer, including that 3 in 4 cancers should be diagnosed at stage 1 or stage 2 by 2028. But despite bold ambitions and increased efforts in recent years, the proportion of cancers diagnosed at an early stage (1 and 2) has been stubbornly stable.

Proportion of all staged cancers diagnosed at stage I and II, England

Our estimates suggest that an additional 100,000 cancer patients would have to be diagnosed at an earlier stage each year to meet the Government’s target in England.

The CRUK Improving Early Diagnosis of Cancer ‘Waterfall’ infographic was first developed in late 2018 to help articulate the things we think will help to reduce the burden of late-stage (advanced) cancer.
It was in anticipation of a significant national commitment to early diagnosis in England and in January 2019, the NHS England Long Term Plan(link is external) (LTP) outlined an ambition that, by 2028, 75% of cancer patients should be diagnosed at stage I or II.

The infographic captures estimated contributions of broad early diagnosis interventions which we think have the potential to drive all-cancer stage shift (not specific stage-shift for particular cancer types). It builds on data where available – such as estimates of the impact of screening interventions – and expert input where it is not. We keep the estimates on which it is based under periodic review. While the initial drive for developing the Improving Early Diagnosis of Cancer ‘Waterfall’ Infographic was policy in England, the estimates within it are relevant to all nations of the UK.

The 'Waterfall' Infographic reinforce that there is no one thing that will achieve the stage-shift we seek and to get closer to our ambitions we need to:

Key areas of activity include:

We have refreshed the look of the ‘Waterfall’ infographic, but there haven’t been any significant new data to warrant a change in the estimates. We have, however, consolidated a couple of the rows which may give the impression that estimates have changed. (* See footnote under infographic for details on amendments.)

In addition to the original Waterfall format which leads from the left and ‘builds’ the impact of different interventions from the baseline stage I and II figure, to a 75% stage I and II, we have also created two further versions:

Late stage version: This infographic leads from the right and articulates the impact of the same categories of intervention, but in terms of their impact on reducing the burden of stage III and IV cancer.

COVID-19 impact: This infographic ‘builds’ the proportion of stage I and II disease like the original, but has arrows overlaid onto each of the rows indicating the impact of COVID-19 on each of the broad intervention areas. While we think there have been some positives, in terms of accelerating streamlined pathways and advancements in some areas of research, we think that the impact is largely negative. This highlights the need for action across all the intervention areas throughout service recovery and beyond.

We continue to explore devolved nations ‘Waterfall’ infographics which reflect the specific stage I/II or III/IV baseline of that nation. In line with that, we have developed a Northern Ireland (NI)-specific version which is being fed into the cancer strategy development.

We have found this resource to be a useful conversation starter around achieving early diagnosis/reducing the burden of advanced disease and an excellent prompt for further questions and discussions. We will continue to horizon scan and update the estimates underpinning the infographic as more evidence arises and are keen to continue to be as responsive as we can to suggestions for how it can be improved and built upon.

Insights from our research have fed into the development of national public awareness activity, including Detect Cancer Early in Scotland and Be Clear on Cancer in England, which has reported positive impact on awareness of cancer symptoms, GP attendances with relevant symptoms, urgent cancer referrals and, in some instances, cancers diagnosed at an earlier stage.
Our understanding of cancer diagnosis in primary care has been improved by studies investigating which symptoms patients present with prior to a diagnosis. This has helped to inform improved cancer referral guidelines and influenced policy to increase GP direct access to diagnostic tests.

Our research through the Accelerate, Coordinate, Evaluate (ACE) programme's assessment of innovative practice and our Early Diagnosis Advisory Group policy-relevant funding committee has supported excellence in the field of early diagnosis research.

We have engaged with stakeholders around the world to support the formation of the International cancer benchmarking partnership (ICBP), an innovative collaboration of clinicians, policymakers, researchers and data experts around the world, benchmarking international variation, identifying best practice and generating insight for policy and practice change. The ICBP has highlighted the contribution of stage at diagnosis to international survival differences. This includes the finding that GPs in the UK are less likely to refer patients for tests at the earliest opportunity than GPs in similar countries.

Research into early diagnosis has been made possible by major improvements in data and intelligence over the last decade. The publication of national data on patient’s stage at diagnosis shines a light on areas of need and provides a baseline to measure improvements. The Routes to Diagnosis methodology allows us to identify the way cancer patients are diagnosed and the impact this has on survival, showing us how critical it is to reduce emergency presentations. 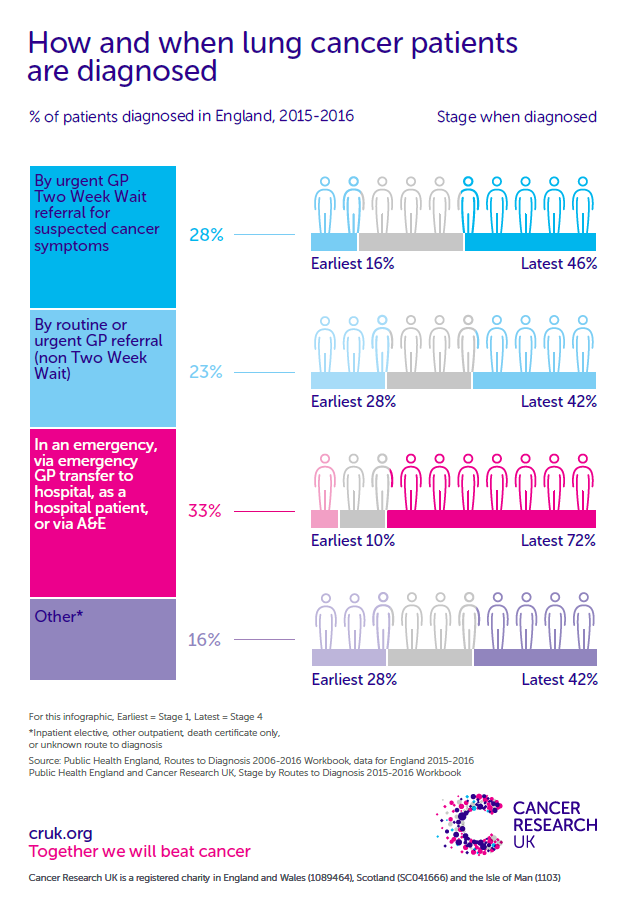 The National Cancer Diagnosis Audit (NCDA), brings together data on the diagnostic pathway for thousands of cancer patients, and  emphasises the  role that primary care can have on cancer diagnosis, revealing the extent and causes of avoidable delays.

Despite the significant developments, nearly half of patients with a known stage are diagnosed at stages III or IV, and almost 1 in 5 newly diagnosed cancer patients in England still receive their diagnosis via an emergency route. CRUK continue to build on our efforts so that fewer patients are diagnosed with late-stage disease, have the option of potentially curative treatments and all patients have the best possible experience.

Improvements to the bowel screening programme, targeted lung health check pilots, changes to referral guidelines and multidisciplinary or ‘rapid diagnostic’ centres (M/RDCs) can all contribute to reducing late-stage burden, but there is still more to be done.

We are helping to shape and fund exciting research supporting the early detection and diagnosis of cancer accepting policy relevant research along with all other types of research one would expect click here for more details.

2019 saw the Cancer Research UK Early Detection (EDx) programme begin its boldest initiative yet; the creation of an International Cancer Early Detection Alliance. This united six of the world’s foremost centres of excellence in EDx research, in the US and UK, in a collaborative virtual institute and further builds the research pipeline, to generate future interventions. See the recent Early Detection and Diagnosis of Cancer; A Roadmap to the Future, which identifies key challenges and recommendations toward early detection and diagnosis.