This trial was for people whose non small cell lung cancer had grown into surrounding tissues or spread elsewhere in the body. And whose lung cancer cells had a change (

Cancer that has grown into surrounding tissues or spread to another part of the body is called locally advanced or advanced cancer.

In this trial, they looked at a drug called selumetinib. It is a type of targeted cancer drug called a cancer growth blocker. It works by targeting a protein called

. This stops signals that cancer cells use to divide and grow.

The researchers thought that having selumetinib with docetaxel might improve treatment for people whose lung cancer cells have a change to the KRAS gene.

The trial team found that adding selumetinib to docetaxel did not improve treatment for people with advanced non small cell lung cancer with a change in the KRAS gene.

505 people took part in this trial. Everyone had at least one treatment for advanced cancer. They were put into 1 of the following treatment groups at random. 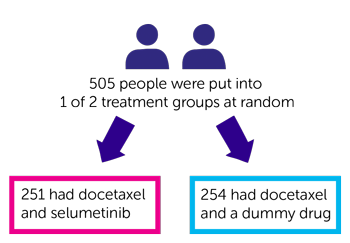 The trial team looked at the average length of time people lived without signs of their cancer getting worse. This is called progression free survival.

They found this was:

They also looked at how long people lived for. This is called overall survival. On average, they found this was:

People who had docetaxel and selumetinib had more problems with:

The trial team concluded that in people with advanced NSCLC with a change to the KRAS gene, selumetinib and docetaxel did not work any better than docetaxel on its own.