This trial compared ruxolitinib with hydroxycarbamide (hydroxyurea) to see which was better at treating symptoms of polycythaemia vera (PV).

Polycythaemia vera is a condition in which the bone marrow makes too many red blood cells. It is one of a group of conditions called myeloproliferative disorders. It is closely related to leukaemia.

Doctors usually treat PV with hydroxycarbamide. But some people still have symptoms such as tiredness, itching, aching muscles and sweating.  So researchers are looking for other treatments.

Ruxolitinib is a targeted cancer drug. It is a cancer growth blocker. It stops signals that cancer cells use to divide and grow. Ruxolitinib may help to relieve the symptoms of polycythaemia vera.

The trial team found that ruxolitinib controlled the symptoms of polycythaemia vera only slightly better than hydroxycarbamide.

This was a phase 3 trial. 110 people took part. They were put into treatment groups (

) by a computer. Neither they or their doctor chose or knew which group they were in. This is called a double blinded trial. 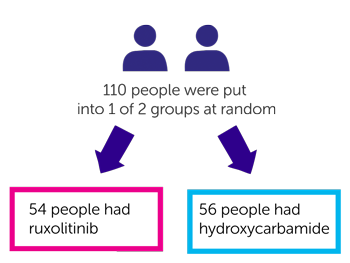 At 16 weeks of treatment researchers were looking for a decrease of half or more (50% or more) in the following group of symptoms:

However the team considered this difference not to be

In the ruxolitinib group 34 people decided to continue with the treatment.

In the hydroxycarbamide group 36 people decided to crossover and have ruxolitinib.

Ruxolitinib benefited both these groups by reducing their symptoms.

The most common side effects of ruxolitinib included:

The most common side effects of hydroxycarbamide included:

Blood clots occurred in 1 person who had ruxolitinib and 6 people who had hydroxycarbamide.