This trial is looking at a drug called olaparib for ovarian cancer, fallopian tube cancer or primary peritoneal cancer that has a change to a gene called BRCA1 or BCRA2.

Ovarian cancer, fallopian tube cancer and primary peritoneal cancer are all treated in the same way, so when we use the term ovarian cancer in this summary, we are referring to all 3.

Doctors can treat ovarian cancer with surgery and chemotherapy.

Ovarian cancer often responds well to chemotherapy that includes a

Olaparib is a type of biological therapy called a PARP-1 inhibitor. This means it blocks an

called PARP-1, which helps damaged cells to repair themselves.

The cells in your cancer already have problems repairing cell damage, because of the BRCA gene fault. Doctors hope that if they can also stop PARP-1 working, the cancer cells will not be able to repair themselves and will die.

The women taking part in this trial have had chemotherapy at least twice and their cancer responded well each time. The aim of the study is to see if taking olaparib helps women in this situation, and whether it delays the cancer coming back again.

To be able to take part in this trial, the researchers need a sample of your primary cancer that was taken when you had surgery or a

. If there isn’t a sample available, you won’t be able to take part.

This phase 3 trial will recruit more than 260 women in a number of different countries. It is a randomised trial. The women taking part are put into treatment groups by a computer. Neither you nor your doctor will be able to decide which group you are in.  And neither of you will know which group you are in. This is called a double blind trial.

Women in one group take olaparib tablets twice every day. Women in the other group take dummy tablets ( 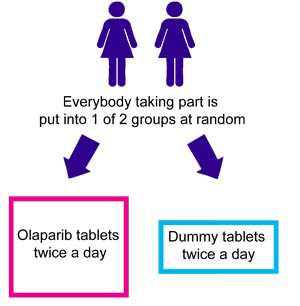 As long as you don’t have bad side effects, you can take the tablets for as long as they appear to be helping you.

at this time and a further biopsy if your cancer gets worse.  You don’t have to agree to this if you don’t want to. You can still take part in the trial.

You see the trial team

You have a CT or MRI scan every 3 months for 18 months, then every 6 months after that for as long as you continue having the trial treatment.

When you finish treatment, you see the trial team again about a month later. They will then contact you by phone every 3 months to see how you are.

Also, if you stop the trial treatment for any reason other than your cancer growing, the trial team will ask you to see them and have a scan every 3 months until your cancer does start to get worse.

All medicines have side effects. As olaparib is new drug, we are still learning about the side effects through