This trial looked at giving farletuzumab alongside chemotherapy for ovarian cancer that had come back after platinum chemotherapy.

Surgery followed by chemotherapy is the usual treatment for ovarian cancer. The chemotherapy often includes a

If your cancer responds to this type of treatment, it is platinum sensitive. And if the cancer comes back, you might have a platinum drug again. You often have this alongside another type of drug called a

In this trial researchers looked at an experimental drug called farletuzumab. It is a type of biological therapy called a monoclonal antibody. Monoclonal antibodies seek out cancer cells by looking for particular proteins on the cells.

All the women taking part had carboplatin and a taxane drug. Some also had 1 of 2 different doses of farletuzumab. Others had a dummy drug (

The aims of the trial were to

The researchers found that when farletuzumab was given alongside chemotherapy it did not increase the amount of time before the cancer got worse. But they think it could be a useful drug for women who have lower levels of

It was a randomised trial. The women taking part were put into treatment groups by a computer. As well as having carboplatin and a taxane chemotherapy: 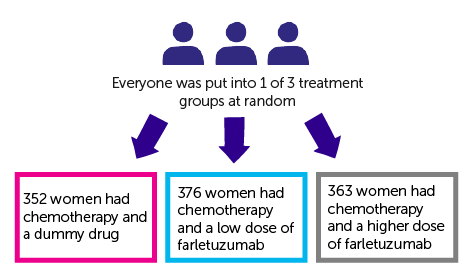 The researchers looked at how long it took for the cancer to get worse in each group (this is progression free survival). They found that on average this was:

The researchers say that these figures are not statistically significant. The small differences could have happened by chance.

They looked at the side effects each group of women had and found that these were mainly related to the chemotherapy drugs they had. The main side effects were:

They found that more women who had the higher dose of farletuzumab had lower levels of red blood cells (anaemia) than in the other 2 groups.

The researchers looked specifically at some sub groups of women. They found that farletuzumab seemed to work best for women in the group who:

They found that these women had a longer time before their cancer came back and also lived longest (overall survival).

Based on this finding the researchers plan to do another study looking at higher doses of farletuzumab for:

) and published in a medical journal. The figures we quote above were provided by the trial team who did the research. We have not analysed the data ourselves