A trial of a vaccine called DCVax-L for glioblastoma multiforme

This is a trial looking at personalised vaccines to treat a type of brain tumour called glioblastoma multiforme.

If you have a glioblastoma multiforme (GBM), your treatment may include surgery, radiotherapy and chemotherapy. In this trial, doctors want to see if adding a vaccine called DCVax-L helps.

To make DCVax-L, researchers use some of your own white blood cells to make what are called dendritic cells. They mix the dendritic cells with proteins taken from your brain tumour to make a

. It can help your immune system to recognise and kill cancer cells.

The aim of the trial is to see if DCVax-L helps people with glioblastoma multiforme.

It may only be possible to confirm the type of brain tumour you have when you have surgery. The researchers will look at a sample removed during the operation to check that your tumour is a glioblastoma multiforme.

This phase 3 trial will recruit about 300 people.

The trial team will talk to you about joining the trial before you have surgery. This is because they need your permission to get samples of your tumour that they would be able to use to make the vaccine.

Agreeing to this doesn’t mean that you will definitely be able to take part in the trial. Whether or not you can take part depends on the results of MRI scans after surgery and radiotherapy, whether the researchers are able to get enough material from your tumour to make the vaccine, and other factors.

If it turns out that you can’t take part in the trial, the sample of your brain tumour will be used for research, unless you tell the trial team that you want it to be destroyed instead.

If it looks as though you can take part in the trial, the next step is for the researchers to get some of your white blood cells to make the vaccine. The way they do this is described in the hospital visits section below.

Sometimes, it isn’t possible to tell from the results of a scan whether or not a tumour has started growing again. It may look as though there is growth, but it could be swelling (inflammation) or scarring after surgery. If the doctors are unsure what the results are showing, you have another MRI scan 2 months later. If this shows there is no growth, you may then be able to take part in the trial.

For every 3 people who take part, 2 have DCVax-L injections and 1 has a dummy injection ( 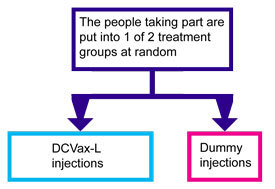 You have the vaccine (or dummy) injections under the skin on your upper arm. You have them 3 times in the first month, 4 more times over the next year and then every 6 months until the end of treatment. You have 2 separate injections each time.

If scans show that your tumour starts to grow again during treatment, you can start having DCVax-L injections regardless of the group you are in. This is called a ‘crossover option’.  You may have already been having the vaccine, or you may have been having the dummy drug – neither you nor your doctor will know. If you go into the crossover option, you still won’t know which treatment you’d been having up until then. But you will definitely be having the vaccine from then on.

Your doctor will tell you if your tumour has started to grow again and then it is your choice whether you want to definitely start having the vaccine or not.

If you do, you start the treatment from the beginning, so you have the vaccine 3 times in the next month, 4 more times over the next year and then every 6 months. You may have other treatment as well if your doctor thinks it is right for you.

After having surgery to remove your brain tumour, you see the trial team and have some more tests. The tests include

If results of these tests show that you can take part in the trial, the researchers need to collect some of your white blood cells to prepare the dendritic cells.

To collect the blood cells, they put a small tube into a vein in each of your arms. One tube removes blood and passes it into a machine that removes the white blood cells. You then have the rest of your blood back through the tube in your other arm. This is called leukapheresis. It takes about 4 hours.

If the researchers don’t get enough cells to make the vaccine, you may have leukapheresis again.

You have another MRI scan after finishing radiotherapy to check that you can have the trial treatment. If you can, you have the vaccine (or dummy injections) up to 10 times over about 2½ years. You will be at the hospital for 2 to 3 hours each time.

During treatment, you see the trial team and have blood tests and an MRI scan every 2 months.

After you finish treatment, the trial team will continue to check your medical notes and will contact you regularly to see how you are.

As this is a new treatment, there may be side effects we don’t know about yet. In earlier trials of DCVax-L injections, the side effects have included