This trial looked at a new drug called tasquinimod for men whose prostate cancer had spread to another part of the body (metastatic or secondary cancer).

Prostate cancer can be treated with hormone therapy. But after some time, it may spread to another part of the body. This is castration resistant prostate cancer.

If this happens, doctors can give chemotherapy,

But doctors are always looking for new ways to help men in this situation. In this trial, they looked at a drug called tasquinimod.

In this trial the researchers wanted to see if tasquinimod would stop castration resistant prostate cancer from growing.

The trial team concluded that tasquinimod could help men with castration resistant prostate cancer that spread to another part of the body. But it did not change the amount of time they lived.

This was an international phase 3 trial. 1245 men with prostate cancer that had spread to the bones took part.

It was a randomised trial. Men were put into 2 treatment groups by a computer:

Men were 2 times more likely to have tasquinimod than the dummy drug. 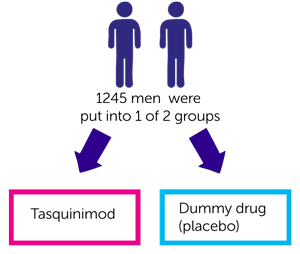 At the end of the trial, doctors found out which treatment the men had:

The researchers looked at the average length of time men lived without any signs of their cancer getting worse. This is called progression free survival. They found it was:

They also looked at the amount of time men lived. This is called overall survival. They found it was:

Doctors also looked at the side effects men had. They found that the most common side effects of tasquinimod were: