This trial is looking at Sativex with temozolomide (Temodal) for a type of brain tumour called glioblastoma multiforme. It is for people whose tumour has come back after treatment.

Doctors can treat glioblastoma multiforme with surgery followed by radiotherapy or chemotherapy. Unfortunately the tumour may start to grow again. In this case, they may use chemotherapy. One chemotherapy drug doctors use is temozolomide. This helps but they are always looking for ways to improve treatment.

In this trial, researchers are looking at a drug called Sativex. The main active ingredients of Sativex are tetrahydrocannabinol (THC) and cannabidiol (CBD). Both of these molecules come from the cannabis (marijuana) plant.

The researchers think that Sativex with temozolomide may work better than temozolomide only for glioblastoma multiforme that has come back.

While taking part in this trial you will not be able to donate blood.

This is an international phase 1 trial. It will recruit 26 people. The trial is in 2 parts.

In the first part of the trial everybody will have Sativex and temozolomide. This part is called an open label trial because both the people taking part and their doctor know what they are having.

Please note:  Part 1 of this trial is now closed. 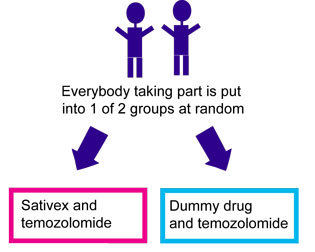 Temozolomide comes in capsules. You swallow them whole with a glass of water. You take them on an empty stomach, for example an hour before or after meals.

You have Sativex, or the dummy drug, as a mouth spray. Your doctor will tell you how to use it.

The researchers will ask for some blood samples. They will use these to check that you are healthy and also to look for a substance (

) that may show how well Sativex is working.

They will also ask for a sample of your cancer that was removed when you had surgery. If you don’t want to give this sample for research, you don’t have to. You can still take part in the trial.

You see the trial team before taking Sativex for the first time in this trial. This is to check that you are suitable for the trial, by having tests. These tests include

The trial doctor will ask you questions about your health and any medication that you are taking.

At the end of the trial, you will stop taking Sativex, or the dummy drug. After a month a member of the trial team will contact you by phone to see how you are.

The doctor will talk to you about your options to carry on taking temozolomide when you are close to the end of the trial.

There may be some side effects of Sativex that we don’t know about yet. The most common known side effects include

We have information about temozolomide.

Your doctor will talk to you about the possible side effects of the medications before you agree to take part in this trial.