This trial looked at which treatment is better to help people with CLL who tested positive to the protein CD20 and who have other health problems.

People who took part were having treatment for CLL for the first time.

CLL is often treated with a combination of chemotherapy and biological therapy.

A chemotherapy drug often used is chlorambucil (or Leukeran). It works by sticking to the cancer cells

so it can’t divide into 2 new cells.

Rituximab (or Mabthera) is a type of biological therapy. It sticks to a protein called CD20 on the surface of the leukaemia cells. The

then picks out the marked cells and kills them.

Doctors also looked at a new biological therapy called obinutuzumab. It works in a similar way to rituximab. The researchers think that obinutuzumab might be better than rituximab.

In this trial people had 1 of the following:

The main aim of this trial was to find out which combination of treatment is better to help people with CLL who have other health problems.

The study team concluded that chlorambucil and obinutuzumab was the best combination of treatment to help people with CLL who have other health problems.

This was an international phase 3 trial. 781 people took part. As well as CLL people also had other health problems such as: 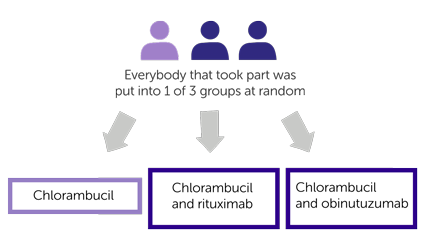 Everyone had treatment in 28 day cycles. People had up to 6 cycles of treatment (around 6 months).

Chlorambucil
118 people took part in this group. Everyone had chlorambucil as tablets.

People had chlorambucil on the 1st day (day 1) and day 15 of each treatment cycle. Then they had a break of 2 weeks.

This continued for as long as the cancer stayed the same and for up to 6 cycles of treatment. If the cancer got worse, people changed groups and had chlorambucil and obinutuzumab. This is called a cross over.

People had chlorambucil and rituximab on day 1 of each treatment cycle and chlorambucil again on day 15. This continued for as long as the cancer stayed the same and for up to 6 cycles of treatment.

All treatment groups
The trial team looked at the side effects each group had. They found that people who had chlorambucil and obinutuzumab had more side effects than the other 2 groups. The most common side effects were:

The team also looked at how well treatment worked. To do this, they looked at the average length of time people lived without any signs of their cancer getting worse. This is called progression free survival. They found it was:

They also looked at the people’s

. They found this was the same in all groups.

So the trial team concluded that chlorambucil and obinutuzumab was the best treatment for people with CLL who have the CD20 protein and other health problems. But there were more side effects.

The team think that people having obinutuzumab for the 1st time should be monitored closely because of the risk of an allergic reaction. This should be managed better in the future as nurses and doctors become more familiar with this treatment.