The trial was looking at vandetanib and radiotherapy for melanoma that had spread to the brain. It was for people who were unable to have surgery to remove the melanoma in their brain.

Vandetanib is a type of biological therapy called a tyrosine kinase inhibitor (TKI for short). TKIs block tyrosine kinase which is a chemical messenger (an enzyme) that sends messages to tell cells to divide and grow. Blocking the effect of tyrosine kinase may stop cancer cells growing.

The aims of this trial were to find out

This was a phase 2 trial. 6 people took part in the first part of the trial to confirm that the dose of vandetanib was safe to have with radiotherapy. 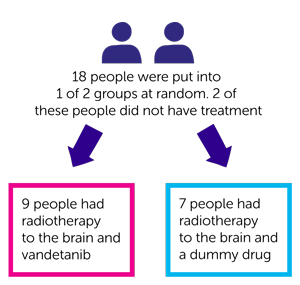 Everyone else had treatment as planned. They had 10 doses (

) of radiotherapy to the brain and took the vandetanib or placebo every day for a total of 21 days. They started taking the drugs 4 days before they started the radiotherapy.

The trial closed after 1 year because of the low numbers of people able to take part. The researchers originally wanted 86 people to take part. But they found it difficult because

In the people who took part, the researchers looked at the time it took for the cancer to start growing again in the brain.
On average this was

The researchers also looked at how long people lived for. On average it was

People who had vandetanib and radiotherapy had a slightly longer time until their cancer in the brain started to grow again. And they did live for slightly longer than the group having the placebo. But the researchers did not think the difference between the groups was significant (not

They also pointed out that, because there were a small number of people in the trial, it was not possible to make any firm conclusions.

The most common side effects reported in both groups were

Finding suitable people to join this trial was difficult. The researchers concluded that this problem should be considered when planning future trials.