This trial looked at pazopanib for transitional cell cancer of the urinary tract that either hadn’t gone away or came back after treatment with chemotherapy. The urinary tract includes the:

Paclitaxel is used to treat cancer of the urothelial tract that has either not gone away or that has come back after treatment. But unfortunately it doesn’t always work very well.

The aims of this study were to find out:

The trial team found that pazopanib didn’t work any better than paclitaxel for people with transitional urothelial tract cancer that has either come back or hadn’t gone away after chemotherapy.

131 people took part in this phase 2 trial. It was a randomised trial. Everyone was put into 1 of 2 groups. Neither they nor their doctor chose which group they were in. 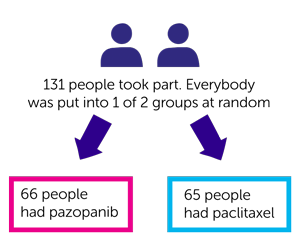 The average follow up of people in the trial was 18 months.

The team looked at the average length of time people lived after treatment. They found it was:

They also looked at the average length of time people were free of any sign of cancer after treatment. They found it was just over:

The trial team concluded that this trial finally shows that pazopanib by itself shouldn’t be used for everyone with transitional urothelial tract cancer. And different approaches with pazopanib or similar drugs shouldn’t be excluded.

Also a personalised approach to treatment using a substance in the body (biomarker) shouldn’t be disregarded.