This trial looked at an immunotherapy drug called IMM-101 with gemcitabine chemotherapy for advanced pancreatic cancer.

When this trial was done, doctors often used gemcitabine chemotherapy to treat cancer of the pancreas that couldn’t be removed with surgery. This can help to shrink the cancer and control symptoms, hopefully improving quality of life.

Researchers in this trial looked at a drug called IMM-101, which is a type of immunotherapy. It helps stimulate the immune system to kill the cancer cells. They wanted to find out if it helped gemcitabine to work better.

The main aims of this trial were to find out:

This trial showed that the combination of IMM-101and gemcitabine could be a useful treatment for pancreatic cancer that has spread.

Results
The trial recruited 110 people with advanced pancreatic cancer who had not had chemotherapy before. They were put into 1 of 2 treatments groups at random, and: 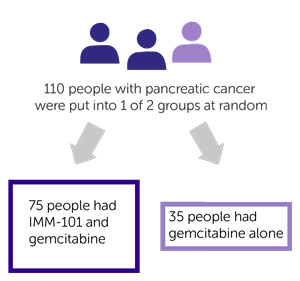 The research team looked at how long people in the two groups lived for. It was slightly longer for those who’d had IMM-101 and gemcitabine, but was similar in both groups.

The team also looked at the length of time from treatment to when half the patients were still alive. This is called median survival time. The time was:

They then looked at the 92 people whose cancer had already spread to another part of the body when they joined the trial. Again they looked at median survival, and they found there was a bigger difference between the two groups. The time was:

The research team analysed how long it was before people’s cancer started to grow again, and it was:

Side effects
Nearly everyone taking part had at least 1 side effect, but some were mild and not serious. When they analysed who’d had more serious side effects, they found it was:

Conclusion
The research team concluded that the combination of IMM-101 and gemcitabine was safe to use, and that it might be a useful treatment for people with pancreatic cancer that has spread.  They suggest that this combination is looked at in further trials. And that IMM-101 could be looked at in combination with other chemotherapy drugs.