This trial looked at lenalidomide (Revlimid) for mantle cell lymphoma when other treatments are no longer working, or it has come back after treatment.

Mantle cell lymphoma is a type of non Hodgkin lymphoma (NHL), cancer of the lymphatic system. Doctors often treat it with chemotherapy, but sometimes the treatment doesn’t work, or the lymphoma starts to grow again. This is sometimes called refractory or relapsed lymphoma.
Doctors can choose from a few different drugs to use if this happens. But they have no way of knowing which treatment is best.
Lenalidomide is type of biological therapy. It works mainly by helping the body’s immune system target the cancer cells. In this trial, they compared lenalidomide to several different cancer drugs already used, to see if it worked better.
The aims of this trial were to find out:

This trial showed that lenalidomide worked better than chemotherapy for mantle cell lymphoma that had continued to grow despite other treatment.
This trial recruited 254 people with mantle cell lymphoma from 12 different countries, including the UK. They had already had treatment for their lymphoma.
They were put into 1 of 2 groups at random, and: 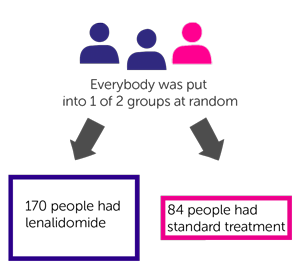 They also looked at the most common length of time before the lymphoma started to grow again. They found it was:
When they look at how long people lived in each group, they found the most common time was:
The trial team also looked at the side effects for most of the people taking part:
More people in the lenalidomide group had serious side effects, including a drop in white blood cells, red blood cells and clotting blood cells (platelets). These side effects were managed with treatments such as

.
The lenalidomide group also had more of the less serious side effects such as tiredness, diarrhoea, constipation and cold like symptoms.
The number of people who stopped treatment because of side effects was similar in both groups. It was 25 out of 167 (15%) in the lenalidomide group, and 13 out of 83 (16%) in the standard treatment group.
Patients were asked to fill in Quality of Life questionnaires at various points in the trial. The results showed that quality of life did not go down with treatment. Those in the lenalidomide group had the same or better quality of life as those in the standard treatment group.
The trial team concluded that lenalidomide worked better than the other treatments for mantle cell lymphoma that had continued to grow despite previous treatment. Although lenalidomide did cause more side effects, the doctors were able to treat them.
We have based this summary on information from the research team. The information they sent us has been reviewed by independent specialists (