Phase 3
This trial looked at ipilimumab, carboplatin and paclitaxel for non small cell lung cancer (NSCLC).
It was for people who had advanced NSCLC. This means that their cancer had:

This trial started in 2011 and these results were published in 2017. Researchers wanted to find out whether adding ipilimumab to the chemotherapy drugs carboplatin and paclitaxel worked better than chemotherapy alone. The trial was for people with advanced NSCLC who hadn’t had chemotherapy before.
During the time this trial was done one of the possible treatments for advanced NSCLC was a combination of the following chemotherapy drugs:
Ipilimumab (Yervoy) is a type of targeted cancer drug called monoclonal antibody. It works by stimulating the body’s

to fight cancer cells.
Ipilimumab is already a treatment for people with other types of cancer, such as melanoma. But doctors wanted to find out if it can also help people with advanced NSCLC.

The trial team concluded that ipilimumab did not help people with advanced NSCLC.
This was an international phase 3 trial. 956 people who were having treatment for advanced NSCLC for the 1st time took part.
This was a randomised trial. This means that the people taking part were put into 1 of the following treatment groups at random by a computer: 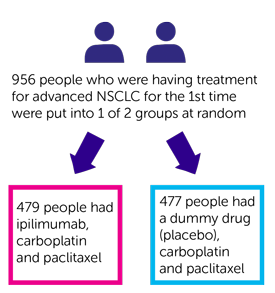 Neither they nor their doctor could choose which group they were in. And neither they nor their doctor knew which group they were in. This was a double bind trial.
Results
The trial team looked at how well ipilimumab worked. To do this they looked at the length of time people lived after treatment. This is called overall survival. They found that:
The team also looked at the average length of time people lived without any signs of their cancer getting worse. This is called progression free survival. They found that, on average, people in both groups lived almost 6 months without signs of their cancer getting worse.
Side effects
The trial team looked at the most common side effects people in the ipilimumab group had. They were:
The most common side effects people in the dummy drug group had were a drop in the number of blood cells, diarrhoea, decreased appetite, sickness, tiredness and numbness in fingers and toes.
Conclusion
The trial team concluded that treatment with ipilimumab, carboplatin and paclitaxel is well tolerated.
They also concluded that ipilimumab together with carboplatin and paclitaxel doesn’t help people with advanced NSCLC. But doctors think that ipilimumab together with other targeted drugs may help people in this situation. They continue to look for different treatment combinations with ipilimumab.
We have based this summary on information from the research team. The information they sent us has been reviewed by independent specialists (