This trial is looking at high pressure oxygen therapy (hyperbaric oxygen therapy) to treat damage to the jaw bone caused by radiotherapy.

This trial is supported by Cancer Research UK.

Radiotherapy is one of the main treatments for cancer. It works by causing damage to the

in cancer cells. Although some of the normal cells are affected by the radiation they are better at repairing themselves than the cancer cells.

If you have radiotherapy to your head and neck, it may cause a breakdown of tissue in the jaw bone. This is called

(pronounced oste-o-rade-o-ne-krosis). If the damage is bad enough to cause symptoms, your doctor may suggest surgery to remove the damaged jaw bone.

High pressure oxygen therapy may help the bone to heal after surgery. But this isn’t known for sure.

In this trial, half the people will have high pressure oxygen therapy before and after surgery to remove the damaged part of their jaw bone. The other half will have surgery only.

The main aim of the trial is to find out if high pressure oxygen therapy can help the healing of the jaw bone after surgery.

You may be able to join this trial if all of these apply. You

If you are a woman, you must also be willing to use reliable contraception during the trial if there is any chance you could become pregnant.

This is an international phase 3 trial. The researchers need 114 people to join the trial.

It is a randomised trial. The people taking part are put into treatment groups by a computer. Neither you nor your doctor will be able to decide which group you are in.

People in group 1 will have surgery to remove the damaged part of their jaw.

People in group 2 will have high pressure oxygen therapy (hyperbaric therapy) before and after their surgery to remove the damaged part of their jaw. 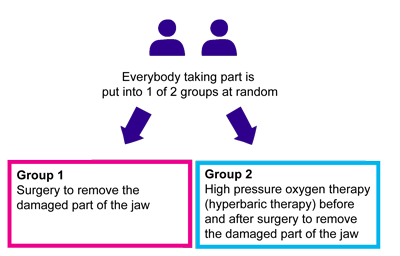 If you are in group 2, you have high pressure oxygen therapy in the treatment centre that is closest to you. As there are only 5 such centres in the UK you may have to travel quite a distance for the treatment.

You have 30 treatments before surgery and 10 treatments after surgery. You have your treatments Monday to Friday. The treatment lasts for 1½ hours each day. You have it as an outpatient so you can go home afterwards.

The trial team will ask you to fill out a questionnaire before surgery, a week later, then 1 month, 3 months and a year after surgery. The questionnaires will ask about side effects and how you’ve been feeling. This is called a quality of life study.

If you take part in this trial, the researchers will ask for a sample of spit (saliva) and a blood sample after surgery and a year later. They will use these to look for substances (

) that may be a sign of a lack of oxygen.

They will also take a photograph of your jaw when you join the trial and another one a year later. It will not be possible to identify you from these photos.

You see the doctor and have some tests before taking part in the trial. These tests include

You see the doctor 1 month, 3 months and a year after surgery. You have the same tests again each time.

The side effects of high pressure oxygen therapy include

Your doctor will talk to you about the possible complications of surgery and side effects of high pressure oxygen therapy before you agree to take part in this trial.