A trial looking at high dose chemotherapy, radiotherapy and stem cell transplant for people with primary lymphoma of the brain or spinal cord (IELSG32)

This trial looked at improving treatment for people with recently diagnosed primary lymphoma of the brain or spinal cord.  This is a type of non-Hodgkin lymphoma called central nervous system (CNS) lymphoma.

Chemotherapy followed by radiotherapy to the whole brain is the usual treatment for CNS lymphoma. Methotrexate and cytarabine are 2 drugs often used. But doctors are always looking at new ways to improve treatment.

We knew from research that thiotepa and rituximab might also help people with lymphoma.

Thiotepa is a chemotherapy drug. Rituximab is a biological therapy called a monoclonal antibody.

Researchers wanted to see if adding these 2 drugs to methotrexate and cytarabine would improve treatment. So they compared 3 different combinations:

After chemotherapy people with CNS lymphoma usually have radiotherapy to the whole brain. The researchers thought that chemotherapy followed by a stem cell transplant might be better than radiotherapy.

The trial team found the addition of thiotepa and rituximab to methotrexate and cytarabine worked well for people up to the age of 70 with CNS lymphoma.

This was a phase 2 trial. It was a randomised trial. The people taking part were put into treatment groups by a computer. Neither they nor their doctor could choose which group they were in.

Everyone had chemotherapy to start. After their chemotherapy they were randomised again to have further treatment as part of the trial.

227 people took part and the team were able to look at the results of 219. 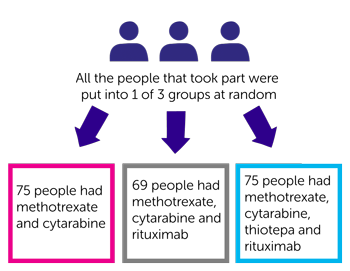 ) and those who lymphoma had shrunk (

They found of those who had a complete response:

For those who had a partial response:

The most severe side effects in all 3 groups were:

Based on these results the trial team concluded the combination of methotrexate, cytarabine, rituximab and thiotepa should be

. This is for people

The trial team are continuing to follow up the people who after this had:

When these results become available we will update this summary.