A trial looking at everolimus for neuroendocrine tumours (RADIANT 4)

This trial looked at everolimus (Afinitor) to treat neuroendocrine tumours (NETs) of the digestive system or lungs.

Neuroendocrine tumours (NETs) are a rare group of cancers that develop in the neuroendocrine system. Some make extra hormones and cause symptoms, and others don’t.

This trial was for people who had a NET of the

or lungs that didn’t make extra hormones. These are non functioning NETs.

Everolimus is a type of targeted cancer drug (biological therapy) called a cancer growth blocker. We know from research that everolimus helps treat NETs that affect other parts of the body.

The aim of this trial was to find if everolimus could help people with non functioning NETs of the digestive system or lungs.

The team found that everolimus did help people with non functioning NETs of the digestive system or lungs. 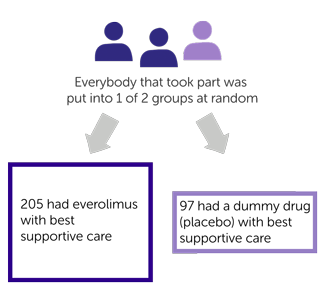 As part of the trial, when their NET started to grow again people taking the dummy drug took everolimus, they ‘crossed over’.

The researchers looked at the average length of time it took for the NET to start grow again. They found it was:

This shows that everolimus stopped the NET coming back for 7 months longer than the dummy drug.

During follow up after treatment, the trial team also looked at how many people were alive. They found that more people who had everolimus were than those who had the dummy drug.

The most common severe side effects of everolimus were:

The trial team concluded that everolimus significantly improved the length of time it took before the NET started to grow again. This trial also shows that the risk of dying from their NET is reduced for people who have everolimus.