This trial compared surgery to remove lymph nodes in squamous cell cancers of the head and neck with a ‘watch and wait’ policy using PET-CT scanning.

is the usual treatment for

cancer of the head and neck that has spread to the lymph nodes. This is usually followed by surgery to remove remaining cancer cells in the

in the neck. This is called a neck dissection.

Some people don’t have any cancer in their lymph nodes after chemoradiation and don’t need surgery. But when this trial was done, there was no reliable way to identify which people still had remaining cancer cells. Doctors thought a new type of scanner called a PET-CT could help to see if there were any cancer cells in the lymph nodes.

The aims of the trial were to

The trial team found that PET-CT scanning was very useful. It can prevent unnecessary operations and better target areas of cancer in the small number of people who do need surgery.

564 people took part. After chemoradiation, they were put into 1 of 2 treatment groups at random 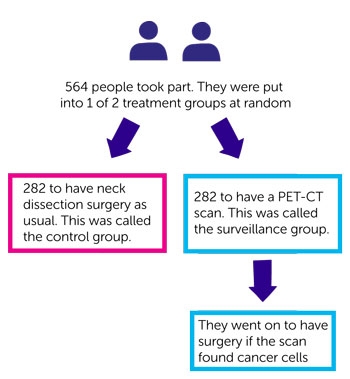 The trial team looked at who had surgery. This was

They found there was no difference between the 2 different groups in either of these.

The researchers concluded that