This trial looked at a drug called pregabalin to see if it can help to reduce pain caused by secondary cancer in the bones. People taking part in this trial also had radiotherapy to relieve their pain. This trial was supported by Cancer Research UK.

in the bones can cause pain that is sometimes difficult to treat. Doctors may use both painkillers and radiotherapy for bone pain.

In this trial, the researchers looked at a drug called pregabalin. This is already a treatment for nerve pain, but they thought it might also help to relieve bone pain.

The aim of the trial was to find out if taking pregabalin after radiotherapy works better than having radiotherapy alone for bone pain.

The trial team found that taking pregabalin did not help people who had bone pain caused by cancer.

The trial was in 2 parts. First people had their pain assessed by a doctor or a nurse.

If their pain measured 4 or more on a scale of 0 to10 they took part in the treatment part of the trial.

The trial was randomised. This means people were put into one of 2 treatment groups by a computer. The treatment looked the same for both groups. This is called a double blind trial.

233 people took part. Everybody had radiotherapy, and then 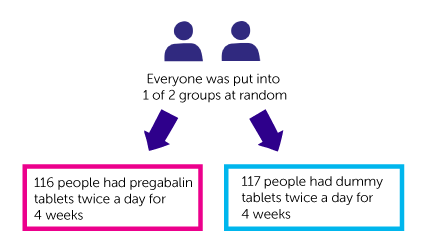 The researcher’s main aims were

They found that this happened for

The researchers also looked at

The researchers found no difference between the 2 groups for

The people taking pregabalin said their mood improved and they had less breakthrough pain. But the researchers pointed out that numbers of people who reported this was still not high enough for them to be confident in this finding. They also pointed out that pregabalin is a treatment for anxiety.

People in both groups had side effects.

The most common side effects included

So, pregabalin is not useful for people with pain caused by cancer in their bones.

The researchers would like to see more trials for people with advanced cancer. They also think that pregabalin could possibly work for people who have bone pain and nerve pain (neuropathic pain). They think a future trial looking at this would be interesting.