Treatment for chronic lymphocytic leukaemia (CLL) is usually chemotherapy. When the first treatment stops working, your doctor may suggest you have another type. This is called second line treatment.

Lenalidomide is a type of targeted cancer drug. It works mainly by helping the body’s

The aim of this trial was to find out if lenalidomide stopped B cell CLL coming back after responding to second line chemotherapy.

The trial team found that lenalidomide did stop B cell CLL coming back after 2nd line treatment but didn’t increase the length of time people lived.
This was an international phase 3 trial. It was a randomised trial. The 314 people who took part were put into 1 of 2 treatment groups. 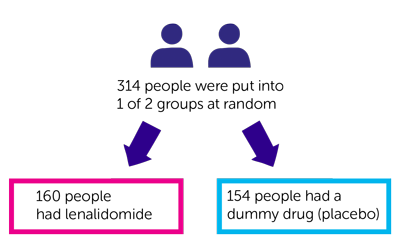 After an average follow up of just over 2 ½ years the team looked at how long it took for the leukaemia to come back in each group. They found it was:

The team also looked at how long it took for the leukaemia to come back after this treatment in each group. That is when it came back for a 2nd time and needed further treatment.
They found that it was significantly longer in those who had lenalidomide. They stated this suggests that having long term lenalidomide didn’t affect how well further treatment would work.
When they looked at how long people in each group lived they found no significant difference.
The researchers found no significant difference in the quality of life between the 2 groups.
The side effects of lenalidomide were the same as in other trials using lenalidomide. The worst were: