This trial compared pemetrexed or etoposide alongside cisplatin and radiotherapy for non small cell lung cancer.

) and it could not be removed with an operation.

Radiotherapy and chemotherapy are some of the usual treatments for non small cell lung cancer (NSCLC) if it is not possible to have surgery to remove it.

Results of the trial were published in 2016. This explained that the trial was stopped after a review by the committee that monitors the safety and design of the trial (the

The committee looked at the results after people had finished all their treatment. These results suggested that it was very unlikely this trial would be able to show that having pemetrexed worked better than etoposide. So they decided it was best that no more people should take part.

555 people did take part in the trial. They were put into 1 of 2 groups at random. 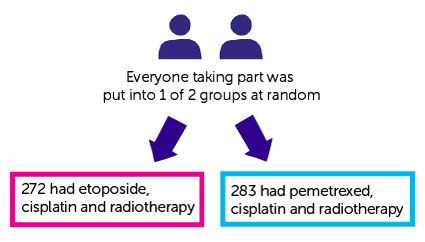 People in the etoposide group had:

People in the pemetrexed group had:

The researchers looked at how long people lived for after treatment (overall survival). They found that on average, this was:

So although the above results show a very small difference in survival, it was not statistically significant. This means the difference between the 2 groups could have happened by chance.

The side effects between the 2 groups were similar. But people who had etoposide had more problems with: