A trial looking at docetaxel, zoledronic acid and strontium 89 for prostate cancer that has spread to the bones (Trapeze trial)

This trial looked at finding the best combination of treatment to give to men when their cancer had spread to their bones.

Doctors usually treat prostate cancer with one or more of the following treatments:

But sometimes these treatments don’t work and the cancer continues to grow or spread (metastasise) to another part of the body.

When cancer spreads to the bones it can be painful. Treatments to help slow the growth of the cancer and relieve the pain include chemotherapy (such as docetaxel), a group of drugs called

(such as zoledronic acid) or a type of radiotherapy called strontium 89.

In this trial they compared:

These treatments are not usually given together. The aims of the trial were to find more about how well the combinations work and what the side effects were.

This was a phase 3 trial. 757 men took part in this randomised trial. They were put into 1 of 4 groups by a computer. Neither they nor their doctor chose which group they were in. 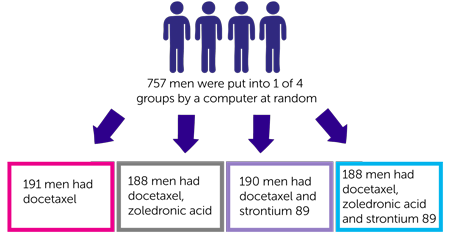 The team found that strontium 89 had a moderate effect of increasing the amount of time the men lived without any clinical signs of the cancer in their bones getting worse.

The average delay for new symptoms to appear was about a month. Strontium 89 had no effect on the total number of bone problems experienced by men in the trial.

Zoledronic acid significantly delayed the amount of time before men presented with a new bone problem due to their prostate cancer. The delay was around 2½ months.

The total number of unpleasant bone complications were reduced by about a third in men who had zoledronic acid. These include:

Neither strontium 89 or zoledronic acid increased the length of time the men lived after treatment.

The side effects were the same in each treatment group. The worst side effects reported were mainly due to the chemotherapy and were:

In addition, many men in the trial reported bone pain and tiredness but these were due to the cancer itself and not the treatments.

The team also found that adding strontium 89 or zoledronic acid to chemotherapy increased the cost of treatment initially. But in the long term it was a cost saving measure because the men were healthier for longer. And in particular needed fewer treatments such as radiotherapy or surgery for bone complications of cancer.

The team concluded that giving strontium 89 with docetaxel increased the amount of time men lived free of their bone spread getting worse. But because similar treatments worked better the team felt these results couldn’t support the widespread use of strontium 89.

In comparison as zoledronic acid reduces bone problems caused by advanced prostate cancer it should still have an important role in treatment.

) and published in a medical journals. The figures we quote above were provided by the trial team who did the research. We have not analysed the data ourselves.