This trial compared 2 weekly with 3 weekly epirubicin followed by either CMF or capecitabine, after surgery for breast cancer.

This combination of drugs is called CMF. This was the standard treatment when this trial was done.

Some people have epirubicin every 3 weeks. Before this trial had started, some research showed that having chemotherapy every 2 weeks might improve outcome. This is called accelerated treatment. But researchers weren’t sure if accelerated treatment would improve the effect on the cancer. So they wanted to find out more.

In this trial, they also looked at another chemotherapy drug called capecitabine. They thought it might work as well as CMF and have fewer side effects. But again they weren’t sure, so wanted to find out more.

The main aims of the trial were to find out:

The trial team found no difference in having epirubicin every 2 weeks compared with having it every 3 weeks. However, they found that capecitabine could be used as an alternative to CMF. It caused fewer side effects and improved quality of life.

It was a randomised trial. The people were put into 1 of the 4 following treatments groups:

People who had 2 weekly epirubicin also had 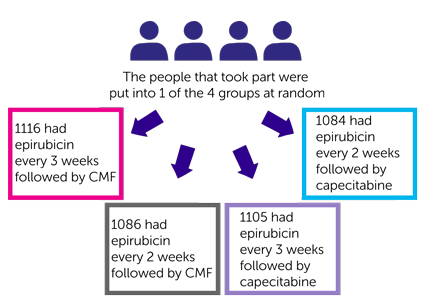 They also looked at the side effects in both groups.

With 3 weekly epirubicin, the most common severe side effects were:

With 2 weekly epirubicin the most common severe side effects were:

They also reported a worse quality of life than those who had 3 weekly treatment, although this difference did not persist after treatment finished.

The most common side effects for both groups were:

The trial team concluded that having 2 weekly epirubicin did not improve the effect on the cancer or quality of life.

CMF compared with capecitabine
The researchers looked at those people whose cancer came back (recurred) and when this happened. They found there was no difference in recurrence between these 2 groups.

Overall, people having CMF had more severe side effects such as:

They reported a worse quality of life at the end of treatment than those who had capecitabine. This difference continued 12 and 24 months after treatment had finished.