This trial compared capecitabine and bevacizumab with capecitabine alone for bowel (colorectal) cancer. It was for people whose cancer was thought to have a high risk of spreading to another part of the body.

Surgery is a common treatment for bowel cancer. And doctors often treat colorectal cancer with chemotherapy after surgery to help stop the cancer coming back.

Two drugs commonly used are 5FU and capecitabine (Xeloda). Capecitabine is similar to 5FU but is a tablet rather than an injection.

Doctors thought the combination of capecitabine and bevacizumab (Avastin) might be better at stopping the cancer coming back. But they weren’t sure.

Bevacizumab is type of biological therapy called a monoclonal antibody.

The aim of the trial was to find out which was best at stopping colorectal cancer coming back after surgery. And to find out more about the side effects.

The team found that the combination of bevacizumab and capecitabine wasn’t any better than capecitabine alone.

This phase 3 trial was randomised. 1,952 people took part and were put into 1 of 2 treatment groups: 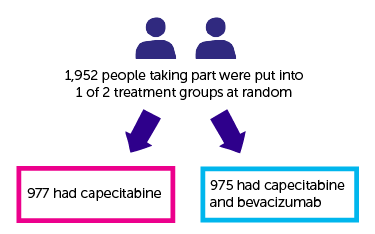 Of these the researchers were able to look at the results of 1,941 people:

The team looked at the number of people who were alive and had no sign of cancer 3 years after treatment. They found the number was similar in both groups. It was:

The most severe side effects of the combination of capecitabine and bevacizumab were:

The team also looked at substances in blood and tissue samples (

) that could tell them how well the treatment was working. They found that a small group of people with certain biomarkers might benefit from having bevacizumab with capecitabine after surgery to remove their bowel cancer.

The trial team concluded that combining bevacizumab with capecitabine didn’t benefit people after surgery to remove their cancer. But for a small group of people whose cancer cells have a certain biomarker there might be a benefit. And this would be worth studying further.