This trial is looking at 2 tests called CEP17 and TOP2A to help doctors decide the best type of chemotherapy to give before surgery for invasive breast cancer. This trial is supported by Cancer Research UK.

At the moment, doctors usually give both drugs one after the other. These drugs work in different ways to kill cancer cells. For some people epirubicin works well and for other people docetaxel works well. But doctors aren’t sure which drugs work best for which people. All  drugs have side effects and doctors don’t want to give drugs that people don’t need.

In this trial, researchers are looking at 2 new tests. The tests are called CEP17 and TOP2A. They may help doctors to work out who benefits most from having epirubicin or who would benefit from having docetaxel.

The aims of the trial are to find out

The following bullet points list the entry conditions for this trial. If you are unsure about any of these speak with your doctor or the trial team. They will be able to advise you.

You may be able to join this trial if one of the following apply.

As well as the above, all of the following must apply.

To begin with, a sample of tissue you had taken when you had a biopsy will be sent to a specialist laboratory. They test the sample for both CEP17 and TOP2A. If, for some reason, the researchers can’t test your tissue sample for CEP 17 or TOP2A, you won’t be able to take part in the trial.

This is a randomised trial. The people taking part are put into treatment groups by a computer. Neither you nor your doctor will be able to decide which group you are in.

Everyone has chemotherapy followed by surgery. 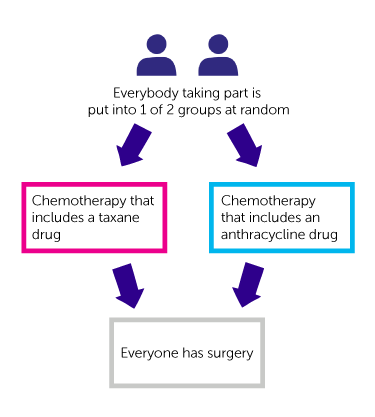 In this trial, the chemotherapy combination that includes a taxane drug is called TC. It includes 2 drugs called

You have either FEC or TC once every 3 weeks. Each 3 week period is called a cycle of treatment. You have treatment as a drip into a vein. You have up to 4 cycles of treatment to begin with.

If your cancer is HER2 positive you also have trastuzumab alongside chemotherapy. This is usual treatment for people with HER2 positive breast cancer. You have it either as a drip into a vein or injections under the skin. You have it once every 3 weeks for up to 1 year.

After 4 cycles of treatment you have a scan. If it shows the cancer hasn’t shrunk very much, you may have a further 4 cycles of chemotherapy before surgery.

If it has shrunk enough, you have surgery. Doctors look at the tissue removed during the operation to see if there is any cancer left. If the cancer has completely disappeared, you may or may not have 2 more cycles of chemotherapy. This is up to you and your doctor to decide. If the cancer hasn’t completely disappeared, you have further chemotherapy after surgery.  If you had FEC initially you have TC. If you had TC initially you now have FEC.

It is usual to have an ultrasound scan to look at the lymph glands (sometimes called lymph nodes) under your arm. If they look abnormal you have a biopsy. If there is cancer in the nodes, you have all the nodes under the arm removed during surgery. This is called an axillary dissection or axillary clearance.

You see the doctor to have some tests before taking part in the trial. These include

You have your chemotherapy and surgery at the hospital. How long you stay in hospital after surgery depends on the type of operation you have. Your doctor can tell more about this.

You see the trial team

The most common side effect of chemotherapy drugs include

A common side effect of epirubicin is heart damage, but this usually happens with higher doses than the doses used in this trial.

The most common side effects of docetaxel are

We have more information on the side effects of