This trial was for women whose breast cancer had come back in the same place or had spread to another part of the body (advanced breast cancer).

Their cancer also had to be:

for the hormones oestrogen and progesterone. HER2 negative is when cancer cells don’t have receptors for the

Ribociclib (LEE011) is a type of targeted cancer drug called a cancer growth blocker. It stops signals that cancer cells use to divide and grow.

The researchers wanted to find out if ribociclib alongside letrozole helps women with advanced breast cancer. In this trial, women had 1 of the following:

This was a randomised trial. Women were put into 1 of the following treatment groups by computer: 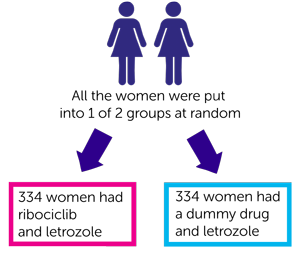 Everyone had treatment for as long as their cancer stayed the same and didn’t get worse. When their cancer got worse (

Some people were still having treatment at the time the study team looked at the results. So, the team looked at how well ribociclib worked for all women after 18 months of treatment.

To do this, doctors looked at the number of women who had no signs of their cancer getting worse after 18 months of treatment. This is called progression free survival. They found it was:

The team also looked at the most common side effects women had. They were:

So, the trial team concluded that ribociclib alongside letrozole helps women with advanced breast cancer. They will continue to look at the results until all women finish their treatment.