This trial compared these 3 approaches to treatment to see which was best for localised prostate cancer.

The researchers followed the men who took part in the trial over an average of 10 years.

Men who had surgery and radiotherapy had lower rates of their cancer growing or spreading elsewhere in the body.

The research team invited 228,966 men to have an appointment with a specialist nurse to talk about having a PSA blood test.

The researchers also included 247 men who had been diagnosed with localised prostate cancer as part of an earlier pilot study, so there were 2,664 men in total.

Of these, more than 6 out of 10 (62%) agreed to have their treatment chosen at random. This means they did not choose which treatment group they were in. 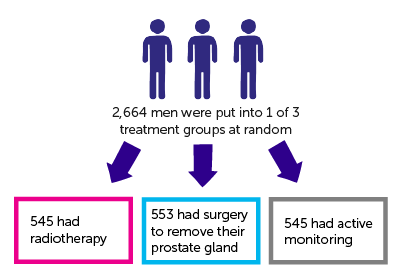 Active monitoring means that you are carefully monitored by your doctor or nurse. You don’t have treatment straight away. You have the option to start treatment if:

By the end of 2015, 291 men in the active monitoring group went on to have radiotherapy or surgery.

Some men in the radiotherapy and surgery groups also went on to have other treatments, as part of their routine care.

The research team followed the men up for an average of 10 years after treatment. They looked at how many:

The researchers did not have data for 14 men (they were lost to follow up). This accounts for just 1%. But they know that they had accurate data for all the men who died.

They found the numbers of men who died from prostate cancer were:

And the numbers of men who died from causes not related to their prostate cancer:

The researchers say that the differences in these numbers are not statistically significant. This means they could have happened by chance.

But there were differences in the number of men whose cancer had grown or spread.

The number of men whose cancer had grown (clinical progression) was:

And the number of men whose cancer had spread (metastasised):

Side effects and Quality of Life
The researchers asked the men to complete questionnaires regularly about the side effects they had. These are called patient reported outcomes.

The questionnaires looked at the effect on

in 4 main areas (domains). These were:

Urinary function
Men who had a prostatectomy had the worse urinary incontinence.

Although this did improve in time, throughout follow up this group of men always reported urine leakage being worse than the men in the other groups. And this had a negative effect on their quality of life, particularly in the first 2 years after treatment.

One way urinary incontinence is measured is by use of pads. 6 years after treatment, the numbers of men needing to use pads were:

Sexual function
Before treatment almost 7 out of 10 men reported that they had an erection that was firm enough for intercourse. 6 months after treatment the numbers were:

There was greater improvement in the radiotherapy group but sexual function remained poor in the surgery group. In the active monitoring group the rate gradually declined every year. At year 6 the number of men who had an erection firm enough for intercourse was:

Bowel function
Men in the radiotherapy group reported worse bowel problems such as loose poo and not being able to control their bowels (faecal incontinence). This improved after a year or two, except for small numbers who experienced blood in poo increasing a little over time. Men in the surgery and active monitoring groups reported little change in their bowel function.

At year 6 the numbers of men who had loose poo about half the time or more frequently were:

Health related
There were no significant differences in any of the treatment groups in relation to general physical and mental health. There were no differences either in anxiety or depression between the groups.

Overall conclusions
The researchers concluded that there were similar high rates of survival in all 3 treatment groups. But there were differences in the rates of growth and spread of the cancer and the side effects of treatment. They say each of the treatments has a role in treating localised prostate cancer. And that longer follow up is needed to see whether things change over the next five to ten years.

The researchers think the results of this study provide patients and doctors with detailed information about the effects and impact of each treatment. This should help men to make an informed decision about which treatment to have.

You can read more on the ProtecT trial website.