This trial looked at a new way of deciding whether or not an ovarian cyst could be cancerous.

It is important that doctors have a way of working out the treatment you need to have if you have a cyst on an ovary. You have surgery to remove it if your doctor thinks the cyst is cancerous.

But if a cyst isn’t cancerous, you might not need to have it removed. Or if you do have surgery you might be able to have a smaller operation called a laparoscopy.

At present, doctors use a system called the Risk of Malignancy Index (RMI) to assess ovarian cysts. This system looks at the results of an ultrasound scan, along with a blood test for a marker called CA125. But the amount of CA125 in your blood can be raised for a number of reasons other than cancer.

Researchers have developed a new way of assessing ovarian cysts based on information from the ultrasound scan, and other details such as your age, but without using the CA125 test. This new system, known as LR2 has already been widely used in studies across Europe.

In this trial, they compared the 2 ways of assessing ovarian cysts in women who have already had an ultrasound scan that showed a cyst.

) growths on the ovaries than the RMI system.

This was a phase 4 trial. It was a randomised trial. The women who took part were put into 1 of 2 groups by a computer.

232 women took part and researchers were able to look at the results of 193 women. 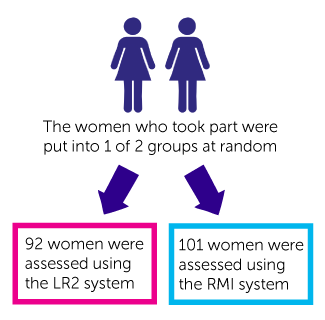 The team looked at how many women’s ovarian cysts were correctly assessed in each group. They found it was:

Because there is a higher risk of ovarian cancer for post menopausal women, the team also looked at the results according to whether the women had been through the

(post menopausal) or hadn’t been through the menopause (pre menopausal). They found that the LR2 system was better at assessing the ovarian cysts in both groups.

The researchers looked at the percentage of benign growths identified that had a low risk of becoming cancer. This is called the safety potential ratio.

They found that the LR2 system had a higher safety potential ratio than the RMI system. This was also the case when the results were split into post menopausal and pre menopausal groups.

They also looked at the percentage of cancerous growths identified that had a moderate to high risk of coming back. This is called the potential efficacy ratio.

The team found that there was no significant difference between the LR2 system and the RMI system in the potential efficacy ratio. Even when they looked at the results according to whether women were pre or post menopausal.

The trial team concluded that the LR2 system was better than the RMI system at identifying and assessing ovarian cysts.