It was for people having their first treatment for advanced lung cancer.

When researchers began this trial, the usual treatment for non small cell lung cancer that has spread elsewhere in the body (advanced cancer) was chemotherapy. This included a

such as cisplatin or carboplatin. Some people may also have had a targeted cancer drug. But not everyone responded well to these treatments.

Researchers are looking for new targeted cancer drugs to treat advanced NSCLC. In this trial, they looked at a drug called ceritinib.

The trial team found that ceritinib improved the length of time people lived without signs of their cancer getting worse.

This phase 3 trial took place worldwide. 376 people took part. People were put into 1 of the following 2 treatment groups at random. 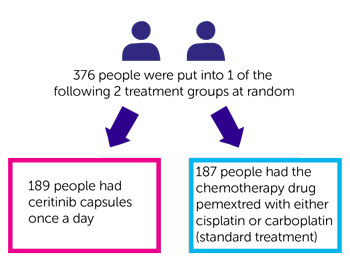 People who had 4 cycles of chemotherapy without their cancer getting worse continued to have pemetrexed to keep the cancer away for longer. This is called maintenance treatment.

Everyone had treatment for as long as it worked and the side effects weren’t too bad. They had regular scans to see if treatment was working. In this trial, people having chemotherapy could start having ceritinib if their cancer got worse. 80 people who stopped chemotherapy went on to have ceritinib.

The trial team looked at the average length of time people lived without signs of their cancer getting worse. Researchers call this progression free survival. They found this was:

In both treatment groups, most of the side effects were mild. People having ceritinib had more problems with:

People having chemotherapy had more problems with a drop in the number of red blood cells causing tiredness and breathlessness. This is called anaemia. Although they also had some problems with feeling or being sick.

Everyone taking part completed regular questionnaires which looked at the symptoms and side effects they had and how this was affecting their day to day life. This is called quality of life. They found that people having ceritinib reported a better quality of life and an improvement in lung cancer symptoms such as pain, cough and shortness of breath.

The researchers did this analysis in 2016. They also planned to look at the number of people alive. This is called overall survival. But it was too early to interpret this data as there wasn’t enough information available. The trial team are still following up those who took part so they hope to have the overall survival results in February 2022.

The trial team concluded that ceritinib worked for people with ALK positive non small cell lung cancer. It improved the length of time people lived without signs of their cancer getting worse. The side effects weren’t too serious and most people reported an improvement in quality of life.