This study was for women with breast or ovarian cancer who have a change in a gene called BRCA1 or BRCA2. It was specifically for women who were the first in their family to be told they had the gene change.

Changes to genes are called mutations. Women with a BRCA1 or BRCA2 gene mutation have an increased risk of getting breast cancer and ovarian cancer.

If a woman is found to have a BRCA1 or BRCA2 gene mutation, genetic testing might also then be discussed with relatives. But there is no agreement about the information that women with a BRCA gene mutation should have.

An increasing number of people are being referred to cancer genetic services. As the demand for this service is rising, it is likely that genetic testing will take place in cancer (oncology) clinics, rather than specialist genetic clinics. So it is important to work out the key messages that women should have and when.

The information and advice that women get may affect the decisions they make about managing their own cancer risk. It could also have an impact on how they talk to other family members about this.

In this study, researchers asked women with cancer and a BRCA gene mutation to look at the information normally given to women in their situation. They also asked the same number of health professionals to look at this information.

The researchers wanted to find out:

The study team were able to identify a number of key messages that were agreed on by both women with a BRCA gene mutation and the health professionals.

Of the 16 women with a BRCA gene mutation who took part:

The 16 health professionals that took part in the study included:

The women with the BRCA mutations and the health professionals were asked to fill out some questionnaires which included:

The messages were information about BRCA gene mutations normally given to women with breast or ovarian cancer.

Both groups were asked to decide:

Everyone was then asked if they agreed with the collected responses. This process happened up to 3 times. 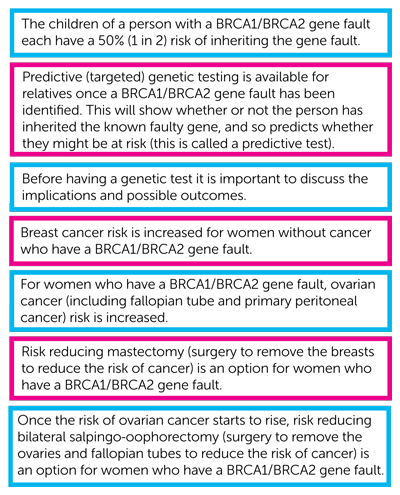 The researchers say that these 7 key messages are not meant to be a definitive list. They recognise that some messages will not be relevant to all women and that some women will want more or less information. But they do think they can be a useful guide for health professionals talking to women with breast or ovarian cancer who are having genetic testing to look for with BRCA mutations.

Agreement
The researchers found it reassuring that there was a high level of agreement amongst the health professionals. This was despite the fact that they came from various specialities and had different training.

The researchers also found a high level of agreement between women with a BRCA mutation and the health professionals. They thought this might reflect a general increase in awareness of the role of inherited genes in breast and ovarian cancer.

When to provide information
Both groups agreed that the best time to communicate these messages was before genetic testing and when a gene mutation was found.

The researchers concluded that the study results will help to develop new ways to provide information. This will be particularly useful as genetic testing becomes part of general cancer services.

Limitations
The research team recognised that this study involved a small group of people and so it might not be possible to apply the results more widely.

They recognised that this study did not look at particular groups of people. For example, it didn’t look at the information needs of women who do not have cancer who have genetic testing. And it didn’t focus on the needs of men with a BRCA gene mutation.