This study is testing a standard dose of nivolumab in people whose cancer has spread or come back (advanced cancer). Doctors usually work out your dose of nivolumab individually but recent research has found that the same dose could work for everyone.

In this study, the doctors want to find out how safe this dose is alongside ipilimumab and how well it works.

We know from research that nivolumab (Opdivo) and ipilimumab (Yervoy)  have helped some people with advanced non small cell lung cancer (NSCLC).

Nivolumab and ipilimumab are both types of targeted cancer treatments called immunotherapies. These drugs attach to cells that are part of the

called T cells, and stimulate the immune system to seek out cancer cells and kill them.

The aims of the study are to find out:

The following bullet points list the entry conditions for this study. Talk to your doctor or the study team if you are unsure about any of these. They will be able to advise you.

To join part A, the following must apply.

To join part B, the following must apply.

For both groups, the following must also apply.

You cannot join this study if any of these apply.

The study team also hope to include 200 people who might not fit some of the above exclusion criteria. For example, you might be able to take part if you are well enough and:

Or, if you are up and about more than half the day and you can look after yourself, but can't work (performance status 2) and your doctor thinks you can tolerate study treatment

The study doctors can tell you more if the above apply and if you might be suitable to join this part of the study.

This phase 3/4 study is taking place worldwide. The researchers need 1,000 people to join including 37 from the UK. 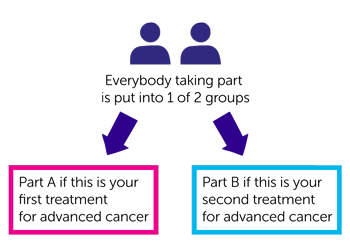 ) that were removed when you had surgery or a biopsy in the past. They will ask you to have a biopsy done if there isn’t a tissue sample available to test. The doctors will also ask to take some extra blood samples. Where possible, you have these at the same time as your routine blood tests.

They plan to look at:

You see a doctor and have some tests before you can take part. These include:

You go to hospital to have treatment. You shouldn’t need to stay overnight.

You have a CT scan every:

When you finish treatment, you see the study team every 3 months to see how you are getting on. The 2 first visits will be hospital appointments and the after that they will phone you.

The most common side effects of having nivolumab and ipilimumab together include:

We have more information about: