This study is looking at pain control after having surgery for lung cancer or mesothelioma of the lung.

Doctors may use surgery to treat lung cancer and mesothelioma. They may do this by doing a type of keyhole surgery using a camera. This is called video assisted thoracic surgery (VATs). Any surgery to the chest and lung can be painful.

) in the area. You have this through a thin plastic tube that the surgeon places in your chest near the wound. They usually start the local anaesthetic after surgery.

The researchers think that pain maybe better controlled if local anaesthetic was started soon after the start of surgery.

The aim of this trial is to find out if starting local anaesthetic soon after the beginning of surgery is better than starting it after surgery.

This study will recruit 100 people. It is a randomised trial. The people taking part are put into treatment groups by a computer. Neither you nor your doctor will be able to decide which group you are in. And neither of you will know which group you are in either. This is called a double blind trial.

The 2 groups in this study are

After surgery everyone has the painkiller (local anaesthetic) through a tube. 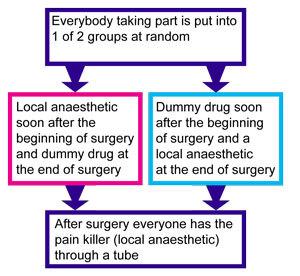 You have your surgery as planned. You have a general anaesthetic. Before starting surgery your surgeon will put a thin plastic tube into your chest. They will inject a dose of the local anaesthetic, or dummy drug, into the tube.

After surgery you have the painkiller (local anaesthetic) through the tube as usual.

There are no extra hospital visits if you take part in this study. A member of the study team will phone you 6 months after your surgery to see how you are.

There are no side effects to taking part in this study. You have pain relief as usual after your surgery.

We have general information about what happens immediately after surgery.