This study looked at possible treatments for a condition called cachexia, in people with non small cell lung cancer or pancreatic cancer.

Some people with cancer lose their appetite, lose weight and have extreme tiredness (fatigue). Your specialists might call this cachexia. At the moment, we don’t know what kind of treatments work best for this.

In this study, researchers looked at possible treatments for cachexia. These were:

The aims of this feasibility study were to:

The researchers were also interested if the combination of these treatments helped people with weight loss, lack of appetite and fatigue.

The study team aimed to start these treatments at an early stage, along with anti cancer treatment such as chemotherapy. This was to try and prevent or treat cachexia as soon as possible.

The trial team concluded that it is safe for people to have these treatments. And that people would be able to manage this alongside treatment for their cancer.

46 people took part in this phase 2 feasibility study. Everyone was put into one of 2 groups randomly by a computer. 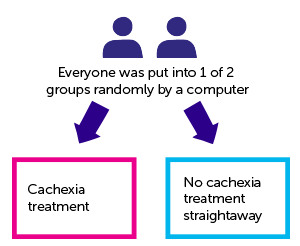 Group 1
Everyone in group 1:

They had this treatment for 6 weeks.

Group 2
The people in group 2 didn’t have this extra support straight away. This is so that the study team could see if the extra support people had in group 1 made a difference.

After 6 weeks, when the team had compared information, the people in group 2 were given this extra support for the same length of time.

41 people out of the 46 completed the study.

The researchers looked at how people followed the trial treatment plan. This is called compliance. From the 25 people in group 1:

Fewer people were compliant with taking the supplement drink than the researchers had hoped.

The researchers also looked at weight loss, physical activity and fatigue. They did this in a number of ways. This included looking at:

The researchers found that on average people in group 1 gained just under 1kg. And those in group 2 on average lost just over 2kg.

The study team found no difference in physical activity, muscle mass or fatigue between the two groups. They also found that survival was similar between the groups.

Side effects
In both groups, the most common side effects included:

The team concluded the treatments for cachexia in this study are safe. Most people were able to keep the treatments up. And they helped people gain weight.

The study team have designed a phase 3 trial to look at these combined treatments in more detail. The researchers used what worked well, and what didn’t work as well, to help with the new trial design.