This study compared telephone calls with hospital visits as follow up for women who have had treatment for womb (endometrial) cancer.

After finishing treatment for womb cancer, you have follow up appointments. This is so your doctor can see how you are getting on.

These follow up appointments can cause some anxiety. And it is unlikely that they will pick up on any signs of your cancer coming back if you don’t have symptoms.

Women who have problems after treatment, normally pick up symptoms themselves, or during routine tests.

Specialist trained nurses called clinical nurse specialists (or CNSs) have the knowledge and skills to carry out follow up appointments. If they do this by telephone, you don’t have to go to a busy outpatient clinic.

In this study, researchers wanted to learn more about what women think of telephone follow up.

The aim of this study was to compare a telephone follow up done by a CNS with hospital follow up after womb cancer treatment.

Everyone who took part had been a patient at one of 5 hospitals in the north west of England.

This study was randomised. Women were put into 1 of 2 groups: 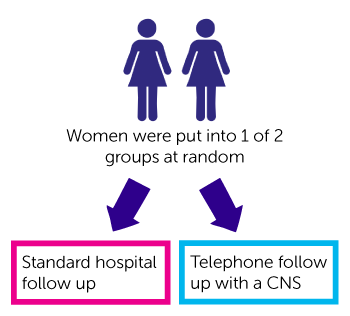 Everyone who took part completed questionnaires before the start of the study and then after:

The questionnaires asked about the women’s

, if they were happy with the follow up and if they felt anxious.

The number of visits depended on the hospital where they had treatment.

The study team also asked 25 women and 6 clinical nurse specialists to have an interview. They wanted to find out what women and nurses thought about having the telephone follow up.

Both groups
The study team looked at the number of women whose cancer came back after treatment (recurrence). They found it was 5 women in each group.

Every woman whose cancer came back had symptoms. Women who were being followed up on the telephone were asked to go to hospital when they had symptoms.

The team also looked at the amount of time it took to diagnose the recurrence, after the symptoms started. They found it was the same in both groups.

The study team concluded that telephone follow up was as good as hospital follow up at picking up signs of womb cancer coming back.

The study team also concluded that women found telephone follow up more convenient. Women saved time and money as they didn’t had to travel to hospital.

The study team also found that the CNS had the skills and knowledge to pick up on signs of the cancer coming back and to do telephone follow up.

The research team thinks that telephone follow up is effective and can be used instead of hospital follow up for women who have had treatment for low risk womb cancer.